You Gotta Fight – For Your Right – To Parrrrrrty!

Now that’s more like playoff hockey!  The boys came out like beasts ready to go at it and the crunching hit on Jordan Leopold by Andy Sutton poured jet fuel on the fire. If the Pens want to party like they did last summer, they’ve gotta fight. Tonight they did. Only Talbot got into a real fight, but the hitting was impressive by everyone, including Orpik, Kunitz, Guerin and Rupp. The Sens ended up with 31 hits but the Pens outdid them with 52. Since they played most of the game with only five defensemen, the way they were able to keep up the physical nature of the game seemed even more amazing. 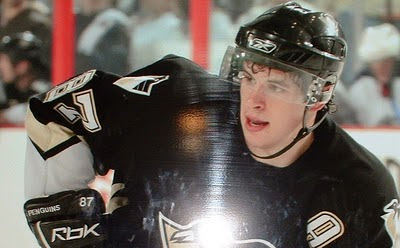 But one can’t say “amazing” without saying “Sidney Crosby”. What did he do in tonight’s game? The better question may be what didn’t he do.

Sid scored the first goal, set up beautifully by Kunitz. He showed off his best impression of a goalie by making an outstanding “save”. He dove behind Fleury and stopped a puck that was slowly inching its way towards the goal line. He knocked Ruutu silly along the boards, and he set up Letang for the game winner. But that was after he performed quite the paso doble as the raging but graceful bull to Jason Spezza’s confused matador! Crosby danced around and around the goal, protecting the puck and keeping Spezza at arm’s length while wearing him out. (Maybe Sid can fit “Dancing With the Stars” into his summer vacation plans.) Then, from his knees, #87 got off a great pass to Letang who weaved the puck through several sticks and bodies, sealing the game for the Pens. Oh, and much of that happened after Guerin inadvertently smacked Crosby across the face with his stick!

The hardworking third line of Staal, Kennedy and Cooke created their special third line lightning and revved up the crowd and their teammates. Even if they don’t score, they cycle, create and work like crazy. It feels like Staal is right on the verge of scoring; maybe we’ll see that happen next game.

As we knew he would, Fleury came back and played his game, although not without a little scare. Only 18 seconds into the contest, Regin bounced one in over Fleury’s head. But our favorite French Canadian goaltender hung in there, making his share of saves and getting help from his captain and defensemen when he needed it.

In true keeping with Stanley Cup tradition, the Pens played a total team game with every facet working well. Geno didn’t score, but that didn’t keep him from being noticeable, doing some fancy dancing with the puck himself.

Now we’re off to Ottawa for Games 3 and 4, facing a hostile crowd who won’t be impressed by Sid and Geno’s antics. The intensity level will be amped up on both sides. We can expect more of what we saw in Game 2 on Sunday night.