Another Teaser from "For the Love of Empty Net Goals..." 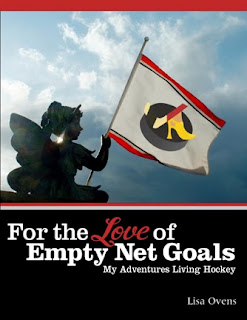 Excerpt from chapter six, Special Spplement: Women Involved with Hockey, a Recent Timeline from the book, For the Love of Empty Net Goals by Lisa Ovens

Special Supplement:
Women Involved with Hockey: A Recent Timeline
Women and hockey have become more connected than ever before. The following pages highlight some noteworthy moments compiled from media headlines, milestone achievements, women on the blogosphere, marketing initiatives, hockey cheerleaders, female ice cleaners, and my personal favorite, hockey-themed beer commercials. Sometimes if you want to see how far women have really come, the garden variety hockey-themed beer commercial can tell the story.

Introduction
Women have been hockey fans and hockey players since the late 1800’s. A whole book could be written on our history with the game (actually one was written, but more about women playing the game: On the Edge: Women Making Hockey History by Elizabeth Etue and Magan K. Williams 1996). But for the sake of this book and limited space, I have only included a few moments covering women’s hockey.

Because For the Love of Empty Net Goals is from the female hockey fan’s perspective, I’ve stuck pretty close to issues and events surrounding us fans. Speaking in the third person, I list myself, but only a few times along the timeline to conserve space.

I did my best to capture as many moments as I could, but there might be some that I have missed, and I apologize. It begins in 2003, because this is when I started to pay attention to the stories and moments capturing our connection with the game.

It’s been interesting watching sports marketing catch up to female fans and seeing marketing people realize that there is indeed more than ten of us.
Forty appears to be our magic number...
If you’ve ever researched statistics about women, the magic number appears to be 40% or darn close to it. It comes up over and over again. For example...
• 41% of the NHL’s audience is women
• 40% of The Daily Show’s audience is women
• 40% of US gamers are women
* 40% of women order pizza after breaking up with their boyfriends
• 40% of women working in science and technology fields say they were discouraged to follow that type of work by their college professors
• 40% of corporate board members in Norway are women
• 40% of Super Bowl Sunday broadcast viewership is women

It is a curious number that forty percent. One has to wonder if we’ll ever get to fifty percent. Then that would be exactly half of something, or an equal part of something, if you will. Anyhow, let’s get at it...

The Detroit Red Wings acknowledge their female fans “leading to the creation of new products such as women-sized hockey jerseys.” According to the Wings senior director of concessions and marketing, Karen Wenson, “We are trying to lead the way in getting more products just for women.”
-Those Wings...they are so on top of everything they do.


In an Associated Press article published on tsn.ca titled Challenging Present, Future for NHL, Lavalle, president of the Sports Marketing Group, said “Women love hockey. I’ve talked to people in the front offices of a lot of sports and nobody understands who their fans are. Young men in the 18-34 year old group and women should be the people the NHL targets.”

-If the NHL follows Lavalle’s suggestion, they’ll have their work cut out for them as they try to reach out to such two different demographics all at the same time.

Although I had first discovered Femmefan.com in 2004, the site has been live since 2000 – female football fans rejoice! However, femmefan.com covers hockey as well as every other major pro sport. Ivette Ricco, and her stable of female and male writers enjoy a large following as they present a complete sports site that specifically serves the female demographic. Ricco is often sought out for her opinions when it comes to female sport fandom and it’s not a wonder: she’s probably one of the first, if not the first woman to recognize and serve a woman’s love and commitment to sports via the Internet.

November 8 2005 Helene Elliott becomes the first female sports journalist to be inducted into the Hockey Hall of Fame.

A long time sports writer (since the late Seventies, a time when women reporters were banned from locker rooms), Helene has reported on LA Kings hockey and practically every major hockey event since then. I couldn’t think of a more fabulous autobiography to read in sports than the one Helene would write. Let’s all hope she plans on it one day.

-Imagine what it was like for her to do her job in the late Seventies? It’s post game and you’ve got to get your quotes and your story filed, asap, and you have to wait outside while all the guys get in the locker room before you do. Then you just wait until the players are finished up in there and exit the door. Oh, the things women go through sometimes just to get the job done...

This is just a sampling of the timeline. To get the full story,
pre-order you copy of For the Love of Empty Net Goals today

For the Love of Empty Net Goals Table of Contents

1 Home and Away
2 Canada/ USA Hockey Relations
3 Bon Voyage - The sequel to Hockey & High Heels
4 She Shoots, She Scores and She Loves it! The Women's Game
5 Super Cosmic Future Era of the NHL
6 Special Supplement: Women Involved with Hockey, a Recent Timeline
7  A Tale of Two Cities: Vancouver and Pittsburgh
8 The Company of Men
9  Eventful
10 2010 Winter Olympic Games
11 The New Champions
Resources and Bonuses
Posted by L.A. Ovens at 1:58 AM 4 comments: