On Sunday evening I was very lucky to visit Vancouver's Orpheum Theatre to catch the Jazz at Lincoln Center Orchestra with Wynton Marsalis (Thanks Cousin Jen!).

I love live music. I was a dedicated band student during my junior high and high school years. I've always had an appreciation for Jazz and Classical music, and I realized this past Sunday that I don't blend  those genres enough into the ambient, techno (and occassional Rage Against the Machine) music listening sessions that take place in the comfort of my own home.


So how does hockey find a place in this little music post? After going through two solid months of playoff hockey, and then a few weeks dominated by the fallout of the post season, I viewed this Jazz Festival outing as a welcome diversion: a evening without hockey :o)

But that ended up not happening. Settled in our seats, I overheard the group of guys taking their seats behind us, and one guy says as he sat down "Okay, which end are the Canucks attacking? Is this the end?" Haha...I had to chuckle to myself on that one.

The performance began, and five arrangements in, Wynton Marsalis takes to the microphone to introduce the the next piece of music...he says "This next one is an arrangement by Herbie Hancock called The Riot."

Instantly, a round of quiet laughter opened up, and then gained momentum as the audience enjoyed a spontaneous and ironic moment. Marsalis smiled at first; it seemed as though he was unaware of the reason behind our laughter, and then said "You got me." And then  he commented, refering to the June 15th, 2011 Stanley Cup riot in Vancouver, "That was a mini riot. Watts, that was a riot". He paused, and then said, "Google it".

The musical highlight for me was Single Petal of a Rose (composed by Duke Ellington in the late Fifties for Queen Elizabeth II) I sat with my eyes closed as they filled with tears. Just a bass clarinet and a piano. It was so beautiful, I didn't want it to end; my head begging for it to come in a "to go" container just so I could carry it with me, bringing it out at future times when I have no words to say.

Ahhh...music, sweet music. The andidote for the hockey void that inevitably  comes along this time of year.

The NHL off- season continues this week as well, with Free Agency...will it be a frenzy?? Here's TSN's Free Agency tracker page

Happy listening, everyone :o)
Posted by L.A. Ovens at 3:30 PM No comments:

Sun Sets on another Season... 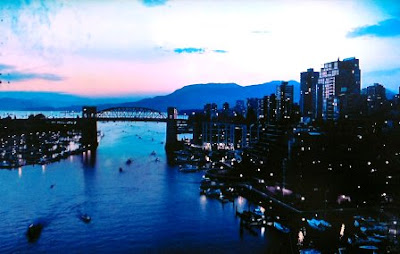 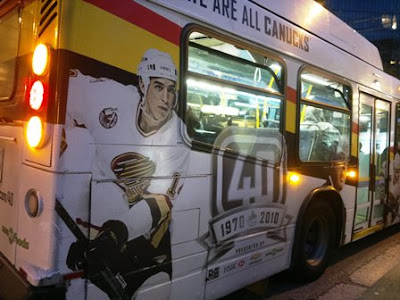 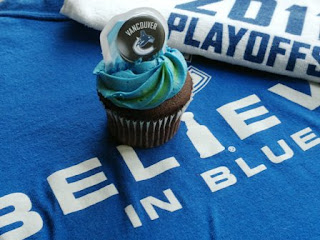 Faith is to believe what you do not yet see

the reward of this faith is to see what you believe.

Canucks/Bruins Game Five: Cheers to Those Who Keep the Faith 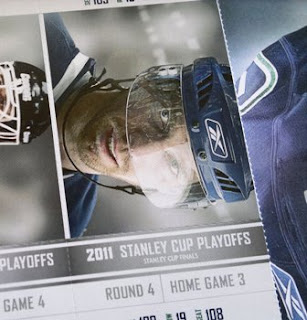 This was one crazy week. I wrote three columns and didn't finish one of them. It was difficult; the more I felt, the more I wrote and then new stories would develop leading me to one conclusion: revise my latest book and re-launch in the fall!

So this column is just a photo essay of life in Vancouver leading up to Game Five of the 2011 Stanley Cup Final, starting with the photo above - The ticket to Game Five story. And it was a story. After two spectacular "Canuckian Losses" in Boston, Vancouver skidded into a tale spin and Game Five ticket prices tumbled. It was a news story because the local media love to devote heavy minutes to ticket prices. It's what they do.

For me I was really disappointed, especially in the fans interviewed (one chick in particular) who said she wouldn't pay more than $100 to see the game, and another man who said he would only pay $75 to see the game. That was harsh. Silly non believers is my nice way of describing the two. Don't they know anything can happen in the playoffs, and it usually does?

For me, I always felt this would be a long series, and wasn't too flustered by the those two blow outs in Boston. I felt bad for Roberto Luongo. Once again he was being nailed to the cross. I wish I could go give him a hug and pat his head saying..."you'll get it done Lou, you'll show them."

Then less than one hour before puck drop, I came across this sign in a little Yaletown Park... 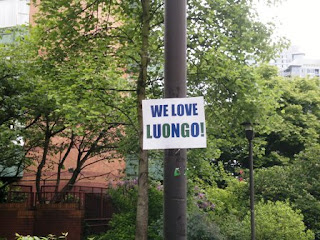 Some sweet soul who's keepin the faith made a sign and posted it in this pretty little greenway in Yaletown. Who knows, maybe they printed up a bunch and peppered the city with the love. Then another sign... 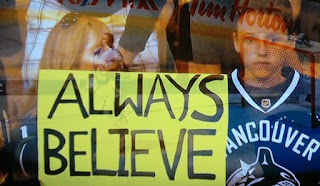 Until this thing is completely over, like so many that are keeping' the faith, I couldn't agree more with this kid's sign. To the cranky pants fans out there...it's really simple. But you know there might have been a few non believers taking up a few little pockets in this crowd... 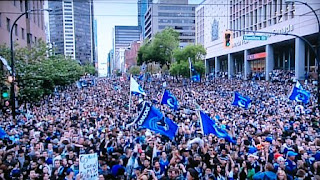 They said there was one hundred thousand extra people in downtown Vancouver for Game Five. This looks like the 2010 Winter Olympics all over again. Or more recently, the royal wedding in London, England. If the Canucks can win this thing, they will be Royalty in this town, and maybe even parts of the Canada (certainly not in Alberta ;o)  Yep...could all the Canuck haters right now think about the first and third stars in the photo below as royalty?? Tee Hee 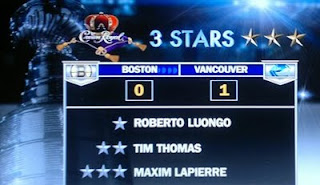 The people that know me know I predicted the Canucks would win Game Five. I believed they could do it. I also believed the fans would show up, big at that game, keeping the faith with a wall of cheer. It was what the Canucks needed and the crowd in Roger's Arena delivered. Then, they got to do more of this on the outside... 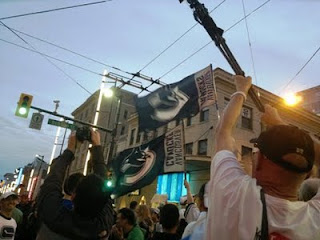 My cousin, Jen didn't want me to walk into the crowds on Granville and Robson. I was a little tipsy from green bottled goodness, but I decided to walk through the streets to find my way home.

So Canuck fans, especially those of you that have recently joined the party,  the Boston Bruins are just as willing to win this thing as the Canucks are. The Boston Bruins will not stop until this thing is over. The Stakes are as high as they come. We can believe our team will win the Cup. But if that doesn't happen in Game Six, please hang in there and keep the faith, like the rest of us do. It beats the hell out of sulking and complaining to the media.

Game Six in Boston on Monday.
The Cup will be in the House.
I don't know how I am going to sleep until then. 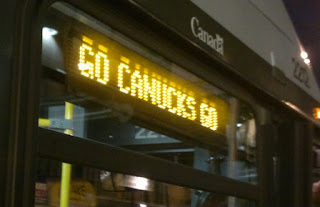 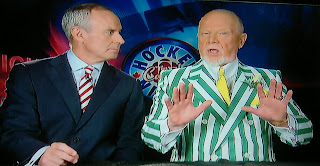 That's one freaky striped jacket...went very well with the freaky play of the Canucks Game Three game. Loud bold pattern did us no favors as we lost 8-1.

The Canucks are now 10-3 when Don sports to the Bold and the Brash. Still no sign of his subdued Bruin inspired emsembles this series (Canucks are 3-5 when Grapes goes low key)...will tonight be the night he represents???
Posted by L.A. Ovens at 1:05 PM No comments:

Canucks/Bruins Games One and Two: Things that Sting 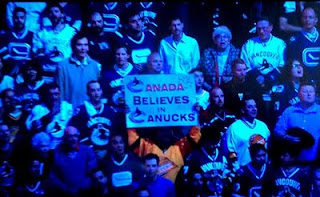 I guess I am only thinking about one type of stinging feeling, and that's what the Bruins could be feeling after experiencing not one, but two painful losses to the Vancouver Canucks. Now they are heading home to Boston down 2 in this series... all I can say is "Ouch!"

Analysts often describe hockey games as " a battle of inches". But in the case of the first two games in the 2011 Stanley Cup Final, it's been about a "battle of seconds." In Game One, it was all about the timing: neither team was on the scoreboard until Raffi Torres scored with 18 seconds left in the third period. A tall order for the Bruins to try and score, forcing overtime in such a small amount of time.

Then Game Two...after holding a 2-1 lead, the Bruins found themselves tied with the Canucks after Daniel Sedin's goal half way through the third period. Any opportunity to win in over time was thwarted by Alex Burrows scoring in spectacular fashion, just 11 seconds into the extra frame. Another OUCH!!!

I get the feeling the Boston Bruins haven't realized where they are yet: they are in the freaking Stanley Cup Final! Earlier this season I heard former NHL'er turned game presenter, Ray Ferraro talking about what it is like to play in huge games. I can't remember what playoff game he was describing, but he said for the first half of his icetime , it was like he wasn't even aware of what he was doing, or something of that nature. I expect it will become a reality for the Bruins once they get back to their home rink, and their home fans.

Now, as a Canuck fan, I wonder what things would be like for the city of Vancouver if the tables were turned right now, and we were down 2 games in this final round. It would be panic attack central! However, we'd also be looking for the little things to build on, and after Game Two for the Bruins there are definitely some things to take away from the OT loss. They scored two goals. They converted on a power play. They had a really strong second period. The games have been close on the scoreboard.

The Canucks have not traveled for a few weeks, so it will be interesting to see how they respond to being on the road again. After watching the news this evening I learned there are plenty of Canuck fans already in Beantown showing their support. It'll be San Jose all over again!

Happy 10th Birthday, Fin!  Way back, my niece was a winner in the Name the Vancouver Canucks Mascot Contest. I say a winner, as other contestants offered up "Fin" in their entries. I am Fin's biggest fan, even when he "bites" my head. He's the Canucks true blue, one and only mascot (sorry Green Guys) and I love him dearly :o)


Speaking of the Green Men... 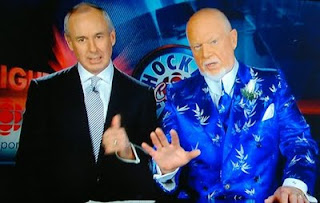 Bold, blue and with a leafy patterned, the jacket wins again! Canucks are now 10-2 when Cherry rocks the busy jackets. However, his love of the Bruins will most likely prevail while he reports from Boston. His "Bruin Tribute" looks often involve a one color/tone jacket, and the Canucks are 3-5 when Cherry sports the more subdued fashions. What say the jacket on Monday and Wednesday???

His voice predicted the Canucks would win game one, and so did the jacket. The Canucks 2011 Stanley Cup Playoff  win/loss record is now 10-2 when Grapes choses a bold, patterned look for his segments on Hockey Night in Canada.
The above "Christmas in June" plaid look for Game One practically gift wrapped the win for the Canucks! I kid. We know the Raffi Torres goal at 18.5 seconds left in the Third, gifted the Canucks the 1-0 win.

However, beware of Cherry's Bruins inspired looks... and you know they are coming. Often with a one tone/color jacket, when Don Cherry shows his Bruin love via the more subdued ensembles, the Canucks are 3-5. It was only 1-5 up until the Western Conference Final.