One, Two, Three OTs and Your Out! 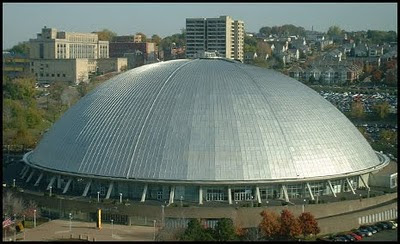 On a night when the Pittsburgh Pirates lost by the embarrassing score of 20-0, the Pens went down to defeat too in the third overtime period.

Things didn’t start out well in the first. Neither team seemed to be too into the game but the Sens managed two goals to none for the Pens by mid-period. The Versus announcers told us that the Sens GM, Bryan Murray, spoke to the team yesterday, telling them to back off the rough stuff a bit. Some people must not have been listening because just two minutes into the game, Ruutu was assessed a penalty for roughing! But in the long run, I guess Murray got it right because the Sens played better and won.

Near the end of period one, Letang scored on a power play goal and things were looking up as the home team began the second period on a power play too. Before long, Kunitz scored but the goal was waved off on the ice because the ref thought the net had come off. After review in Toronto, the disputed goal was declared a good goal, tying the game at 2-2. Okay, that’s more like it!

And the War Room Taketh Away…

Early into the third, again on a power play, it seemed that Kunitz had done it again, scoring on a pass from Gonchar. This one went to Toronto too because the ref ruled the puck was knocked in by a high stick. Toronto agreed and a much hoped-for Pens goal flew out the window.

But never fear – Sid is here! He and Geno combined for a nice goal to put the Pens up 3-2 and we fans began thinking we had this one. But that pesky Regin did it again and scored to tie the game and send it into the first overtime period.

Why should OT be any different? Although it looked like Foligno scored for the Sens, replays revealed a “definite kicking motion” and once again, the War Room got it right and disallowed the goal. After a spirited twenty minutes, no resolution and the second OT was more of the same. Right at the end, Geno danced around the goal, bringing us all to the edges of our seats, thinking he would slap it in and end things, but no, it was not to be tonight.

By the third overtime, things were looking dire. The loyal fans chanted and waved their towels, trying to bring some inspiration and energy to the Pens. But on this night, the Sens were the winners as Carkner slammed a puck past Fleury to end it.

Let’s accentuate the positives. Sid and Geno each had two points. The War Room was three for three. None of the Pens seemed to get injured. Fleury played a great game, but Pascal LeClaire was just one play better.

So let’s get ‘em in Ottawa on Saturday!