I come from the City of Champions – Pittsburgh. Back in the ‘70s, the Steelers were piling up Super Bowl trophies and the “We are Family” Pirates were bringing home World Series triumphs. In the ‘90s, the Penguins laid claim to two Stanley Cups. Just last calendar year, the Steelers again became the NFL Champions while the Pens brought beloved Stanley back to Pittsburgh. 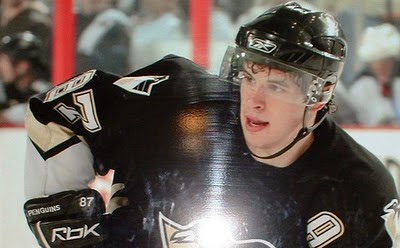 Champions are a rare breed. They are definitely special and possess qualities most of us mere mortals don’t. Fans can see the fire burning in their eyes, feel the determination in their souls and sense the superhuman efforts they are willing to put in to win.

Today I attended a Breakfast with Champions. The event was a fundraiser for the United Way. Several past champions of different sports who live in the area donated their time. Included in the roster were Matt Bullard, a champion from the Houston Rockets, Doug Drabek, a Cy Young Award winning pitcher, Laura Wilkinson, an Olympic Gold Medal winner in diving and Bill Fitch, who was the coach of the Champion Boston Celtic teams starring Larry Byrd.

Listening to these remarkable athletes talk about what it takes to be your best and hearing their opinions on the importance of winning and losing was special. All those who attended were more than happy to give of their time to help the community. These are special humans, role models for sure, whether they choose to be or not. Don’t get me wrong – these folks choose to be.

One of the former NFL players, Gerald Irons from the Oakland Raiders and Cleveland Browns, mentioned a situation when he was upset by a teammate’s actions after a loss. The player, who had contributed to the loss, was leaving the stadium when a small boy approached him for an autograph. The player pushed the boy aside. Gerald was appalled, as most of us would be. He felt that the player should never take out his feelings on a fan, most of all on a little fan. What kind of impression did that boy take away from one of his idols?

In this era, there are many athletes who are not worthy of adulation. They don’t act the way I would want my heroes to act. There are many who I wouldn’t want my kids to look up to. But again, they are role models, whether they think they are or not. Kids are emulating them – the good and the bad. That’s why we have to appreciate the good guys, the ones who conduct themselves in the right way, the ones who play by the rules, the ones who make time for their fans.

The champions I met today were ladies and gentlemen in every sense of the word.

All this brings me to Sidney Crosby. He is about to become an Olympian playing for his country. Judging by the way fans treated him on his most recent trip to Canada, they will appreciate his skills on the ice once the Vancouver games begin. In both Edmonton and Calgary, he held press conferences to accommodate all the press who wanted his time – and he was proposed to by “brides” wearing wedding gowns in both arenas!

I may be a little biased because he plays for my team, but Sidney is the definition of a champion. He doesn’t get in trouble off the ice, he patiently (really patiently) deals with all the media hype and he still manages to excel on the ice. His time with the Stanley Cup this past summer has been widely documented. He took the Cup back to his hometown of Cole Harbour, Nova Scotia where he visited with military personnel and as many of the townspeople as he could. Crosby is always in the lead at team events to visit hospitals or any other worthy cause. Fans from other teams love to hate him, but if he is on your team, as Team Canada will soon discover, you can’t help but love him!

I will be a fan of the U.S. Olympic hockey team, but part of me will be hoping that Sid becomes an Olympic champion too. He deserves it because he works so hard for everything and proves to others that anything is possible.
Posted by L.A. Ovens at 9:13 PM 1 comment: 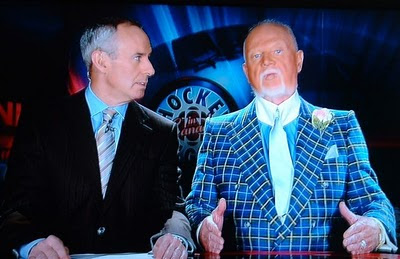 And it's a good one too! I don't recall seeing Don Cherry in this suit before (because sometimes he repeats). I really like the shades of winter blues. Way to go Don for spotting that bolt of cloth at Fabricland!!

PS: for those not in the know, Fabricland is a regular haunt of Don's...check out this Rick Mercer Show Clip....it's 5 minutes 49 seconds, and totally worth the watch!

Another Winter Classic Under Our Belts....

Well how was your first day of 2010? For me, I woke up on my cousin Jen's sofa at 10:50am, reached for the remote and turned on the NHL's Winter Classic game in Boston at the legendary Fenway Park. It was only mid first period, but I was disappointed I missed the pre-game chat, and the hockey pomp and ceremony that goes along with these special outdoor hockey events. This seems to happen to me every year since they started this New Year's Day tradition. If they could just start it a tad later, like 11am or 11:30am PST that would be so" Hockey politically correct!" 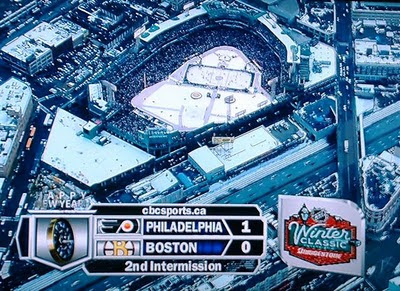 It was soooo easy to cheer for the Boston Bruins (and not because they were playing the Philadelphia Flyers). It just seems natural that you want the home team to win in an outdoor game spectacle. You want to see the home team fans revel in a win, too. Plus I know how my friend, and Pens writer, Jan Snyder feels about the Flyers at times ;o)

Although hockey fans in Canada wonder when another outdoor game will be staged here, I do believe the NHL should continue with a two US based team game every New Year's Day: it's good for the game. Plus, we have our Hockey Day in Canada coming up on January 30th, 2010, and that's one serious day of hockey celebration that our American hockey friends would kill to have down there. Maybe the Winter Classic could morph into a Hockey Day in the USA celebration somehow...it's just a thought.

Like most everyone else watching earlier today, I really didn't jump off the couch until the Bruins Mark Recchi tied up the game with less than three minutes left in the third. Having an overtime period is just what the die hard hockey fans in the stands deserved. I was almost expecting a shoot out until Marco Sturm scored the game winner for the Boston Bruins.

Now the talk is about where and who will be playing in the next Winter Classic. And if the NHL did want to appease Canadian hockey fans, then a double header Winter Classic (early game in the USA, late game in Canada) would be the obvious solution.
Posted by L.A. Ovens at 10:42 PM 3 comments: