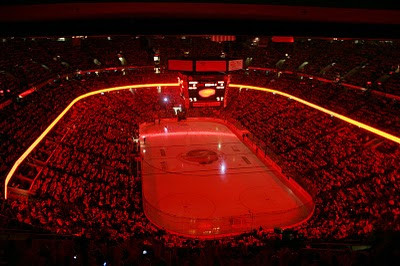 Wow, what a game! If you like offense, this was the game for you. We had a little bit of everything – power play goals, a short-handed goal, a goalie replaced, a broken pane of glass, and a big melee at the end of the game. Not only that, history was made (as predicted in the NHL playoff commercials) when eight goals were scored in the second period alone. The only other time that has happened in playoff history was in 1993 when the Pens and Islanders each scored four.

After a relatively calm first period, the Pens led 1-0 on a power play goal scored by Geno, with Gonchar and Crosby assisting. But after the break, the second period started and the hockey gods decided this would be a good night to rain down goals in Ottawa. Sid and Cooke scored just twelve seconds apart and not too much after that, Sid scored yet again. He ended the game with four points, just another day at the office.

That concluded Brian Elliott’s participation in the game and Pascal LeClaire came in to try to stem the goal-scoring tide. The change in goal seemed to rev up the Sens and very shortly after LeClaire took his place in net, Alfredsson scored Ottawa’s first goal and fired up the crowd. The crowd was so fired up, that the Sens scored again, making it a 4-2 game!

What happens when you need a big goal? You find your Superstar!! No, not Sid, no not Geno – “THE” Superstar – Max Talbot! Taking a nice feed from Craig Adams, Superstar banged it home for a short-handed goal and the Pens grabbed back a 5-2 lead. We could breathe again – but not for long, because Cullen scored on Ottawa’s power play and just like that, it was 5-3. They just kept on comin’.

But a team is a team for a reason. The A-line of Crosby, Kunitz and Guerin teamed up for a beauty scored by Kunitz and it was 6-3 at the end of the wild and crazy second frame.

Ottawa was nothing if not persistent and they came back with goal number four by Spezza in the third. Just when you thought it was safe – aarrggghhhh! But the Pens were not about to be denied and Jordan Staal potted his first playoff goal this season. Finally, the craziness was over, except for a little free-for-all at the end of the game, and the Pens head back to the ‘burg up three games to one.

Despite good plays and determination, Ottawa now has lost both games in their home rink. They have to be feeling discouraged, but that sure doesn’t mean they won’t come out with guns blazing on Thursday. The Pens will need their crowd to help pull them through and hopefully wrap up this first series and get some much deserved rest.