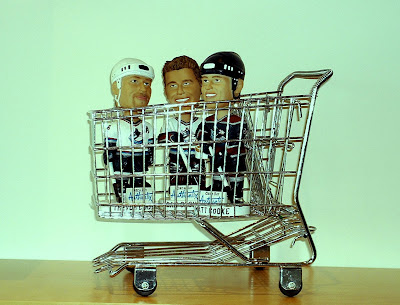 Need something to do between trade announcements? Read this handy dandy NHL Q & A guide to the transactions...click here!
Posted by L.A. Ovens at 10:08 PM No comments:

A New Spin on Hockey Art: The Riot Paintings 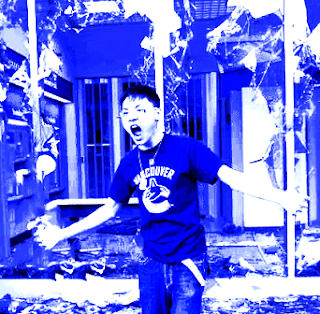 This is not the work of Eli Schryer Allen...it is just my
basic photo editing at work in order to have
an image to accompany this post.

If you've followed this blog or have visited the art gallery on my website, hockeyandhighheels.com, you'll already know of my interest in hockey inspired works of art. I even have a collection of my own work.

Recently a new artist has contributed to this category, and his subject matter just might be deemed controversial by some viewers (Canuck fans in particular).

Eli Schreyer Allen, a fifteen year old Vancouver artist is showing his 2011 Stanley Cup Riot water colors at Emelles Restaurant on West 7th Avenue in Vancouver. The pieces showcase rioters, police and some good Samaritans;  a good selection of those involved, one way or another, in downtown Vancouver on that fateful evening, June 15th, 2011.

As hockey fans know, that horrible riot impacted the lives of many; causing physical harm, fear, heavy stress and millions of dollars in damages to our beautiful city, tarnishing Vancouver's image once again (costly rioting also occurred after the1994 SCF). So, there will be those that just won't get what Eli has done. Over the last few months, a slow motion parade of rioters charged are making their appearances in court, and the search continues to nab the countless other BAD SEEDS...well, these are the scenes many of us would rather see, eight months removed from the devastation.

I have only viewed some of the pieces online, and after looking at the over-sized heads of the figures I was reminded a little of Stewie Griffin's clone (Bitch- Stewie) featured in an episode of The Family Guy. The colorful paintings are complete with paint splatters. This is Eli's lighthearted offering after one very dark and scary night, and then countless hours viewing riot image galleries plastered around the net.

Art collectors and the just plain curious may want to attend the auction of Eli's work on February 24th, 2012. The "Come to Vancouver: It's a Riot" auction takes place from 7pm to 9pm at Emelles (177 west 7th Avenue). Living with Dyslexia, Eli is raising money to cover his expenses for the special education he requires at the Fraser Academy.

As for Eli's work: you can decide for yourself by clicking here.
For John Colebourn's Vancouver Sun news article covering Eli's show, please click here