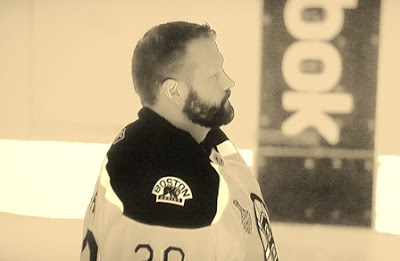 I'm sure we've all been there at least once before. You know...the time you were invited to a party, and you didn't really want to go. There are a variety of reasons: you've been having a lousy week or maybe it was just a crappy day, or you find out someone you don't want to see will be there and you cringe at the thought of  making small talk with that person. But your friends insist that you go. You've run out of excuses, and surrender to your friends and agree to go, but you go under protest and secretly plan to bail after one drink.

You  arrive and quietly tell the host you've got this thing, and the thing's happening early the next day so you can't stay long. Four hours later you are one of the last people to leave. You ended up having a super swell time with everyone and wonder why you were so dead set against going in the first place. After all,  It was just one night of your life. No regrets.

Tim Thomas's politically driven decision to not join his Stanley Cup winning teammates at The White House may have seemed like a good idea at the time. Sadly though, a time may come, much later in his life, when some things that he used to think mattered won't mean a darn thing anymore...and winning the Stanley Cup with the Boston Bruins probably won't be one of them.
Posted by L.A. Ovens at 11:18 PM No comments: