Whip It, Whip it Good! 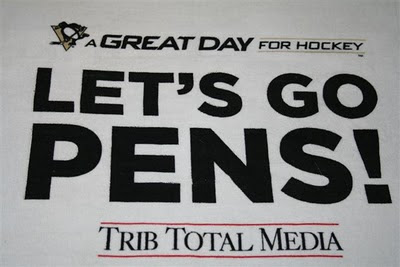 What a shot by Dupuis to end the game in overtime! He whipped it alright and it blew by LeClaire for a goal.

The series ends and as Crosby said, the Pens needed ten periods to finally put the Sens away. They came out with everything they had and the first period was ferocious. This first round series could easily have been dubbed “Upon Further Review” as again tonight, the guys in Toronto got involved in two more rulings. Cullen began the scoring in the first and it was surprising that there wasn’t more scoring with the amount of chances each team had.

As the second period got underway, the Sens demonstrated why they were still playing at this time of year. Both Neil and Alfredsson scored, putting the Pens down 3-0. After all, the Pens finished fourth and the Sens fifth in the end of year standings. Ottawa was not about to go away without a fight. They proved that they were involved for a reason.

But Matt Cooke began chipping away at the lead when he fired the puck by the goalie and brought the score to 3-1. By the way, when the Sens get a goal, their announcer shouts it to the rafters, but when the other team scores, the announcer sounds like Charlie Brown’s teacher, “Waa Waa, Waa, Waa, Waa.” I could never understand what was being said.

Each goalie turned in stellar performances yet again. They each made some incredible saves. In the third, on a power play goal, Bill Guerin scored, followed by another goal from Cooke, tying the score at 3-3. As time wore down, the inevitability of another overtime game was looming. C’mon, Pens, we really don’t want to have to play a Game Seven in the first round, do we?

Overtime ended in just less than ten minutes as a battle of the Pascals. Pascal Dupuis, falling to the ground, whipped the puck past goalie Pascal LeClaire and that was all she wrote! No one could fault LeClaire. His play in these games was amazing and Fleury tuned in quite a performance too, making some big stops on the Sens.

Six hard fought games and the Sens are eliminated. I have to wonder what would have happened if they’d had Kovalev ready to play. But then again, Coach Dan the Man did a great job of moving players around, rewarding those with hot hands, and using every man available.

So who is the Pens next opponent? We won’t know until some of the other match-ups come to an end. In the meantime, the guys get some well-needed and much deserved rest before Round Two rolls along.

I really do hate to see Canadian teams taken out of the tournament, but in this case, I did enjoy it! We’ll have to wait until next season to hear the anthems sung so stirringly in Ottawa.

Stay tuned for further developments in Round Two!