A previously published article by Jan Snyder for Hockeyandhighheels.com 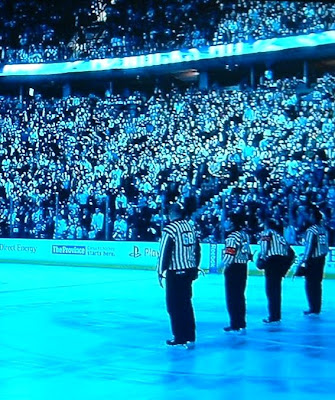 by Jan Snyder
Kevin Pollock is an NHL referee, one of those hard-working guys who enable all of the fans to enjoy hockey games. Without them, there would be no games. Whether we always agree with their decisions or not, they all try to do the best they can to keep order and above all, ensure that the contests are played as fairly as possible.
Although there are two officials for each game, the refs aren’t assigned as pairs. Over the course of the season, they will work with a counterpart more than once, but not because the schedule falls that way.
“It’s not that bad because over the course of the season, it only takes one or two games to get an idea of what your partner’s tendencies are,” Pollock said. “We are really conscious of getting a team effort implemented, so we sit down in the dressing room before the game and talk about it. Even though we try to referee two as one, so we both cover the ice, we reassure each other that if one of us sees a penalty, we’ll call it, even if it’s not in our end. The betterment of the game is the most important thing to us.”
The NHL has been working with a two referee system for seven seasons, which means there are four officials on the ice in addition to the players. How do they manage to stay out of the way of play and players while the game is in progress and still see what’s going on?
“We try to stay out of the way but with the speed of the game now and the way the rules are being called in the neutral zone with no red line, you’re always going to miss a call here or there. It’s an unbelievably fast game now. Sometimes the defensemen get the puck and get rid of it as fast as they can, high off the glass and you just hope you’re not in the line of fire. There aren’t a lot of chances to get out of the way. Some of it is luck and some is positioning.”
Pollock doesn’t wear a shield, although many refs have added them. His wife asks him why he doesn’t wear one – and he doesn’t really have a very good answer for her! But he needs a good look at the ice to be sure he sees everything he needs to be focusing on during the battle.
“Nobody is perfect and we all make mistakes, but if you work hard, limit your mistakes and treat the players and coaches with respect, all you’re asking back is they give you a fair shake and understand where you’re coming from and treat you with respect as well. I believe overall they understand how tough a job we have.”
Still they do the job, watching the play and the players, dodging errant pucks and sticks, and enduring boos from the audience who may not be happy with their calls, and getting together to talk about calls that may be controversial. You may have noticed the refs “huddling up” a little more this season. That is by design, but they don’t do it unless it’s really necessary and they try not to interrupt the flow of the game. They are trying to develop more of a team concept among the officials.
“If there is a play happening that we’re not 100% sure about, we come together and make the right call for the betterment of the game. The puck moves so quickly you might want to ask everyone, ‘Did you have a good look?’ Generally the right call is made.”
Wouldn’t you, the fan, like to be a fly on the ice, so to speak, and hear what’s being said during a game? What does a player have to do or say to be penalized or thrown out?
“We say as officials we don’t want to take emotion out of the game. Sometimes a player is going really hard and working really hard and he may think he got fouled or think he didn’t foul the other player. If it’s just emotion and what he says is just about the call, we tend to try and let him vent a bit and steer clear. But if they get personal and it’s not about the call, we basically say, enough’s enough.”
Pollock's  ultimate goals involve working on the biggest stages.
“Ultimately, like a player, I’d like to do a Stanley Cup final. Everyone on our staff is striving for that. That’s part of what motivates us and makes us competitive among ourselves. If the NHL continues to play in the Olympics, I’d like to be there one day too.”
Posted by L.A. Ovens at 10:27 AM No comments:

From the Archives…Necessary Evil: Part One

Hey hockey fans…Lisa here. I am busy preparing for a Fall/Winter “Good Will Hockey” Tour, so I thought I’d rummage around the archives of the old Lisa’s Lounge and post a previously published article. I found a fabulous" two parter" written by H&HH.com’s very own Jan Snyder covering a popular hockey fan topic: NHL referees. 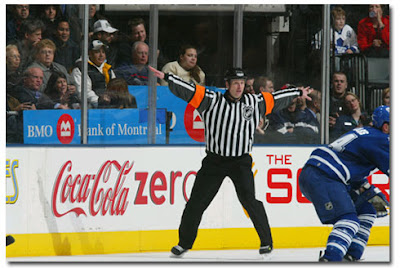 By Jan Snyder
When you’re watching a hockey game, do you ever think about the referees? I mean other than when you get angry with them over a call or non-call? Did you ever wonder about them or what their lives are like? Where would the games be without them? There simply wouldn’t be any! Someone has to keep order on the ice and that’s the job of the referees.
I recently spent some time talking with NHL ref Kevin Pollock. #33 in your programs, Kevin Pollock has been an NHL referee since the 1999/2000 season. He has been involved in 68 playoff games and more than 400 regular season games. In 2003, he was one of the refs at the NHL game played outdoors in Edmonton at the Heritage Classic.
He was gracious enough to talk to me for awhile on one of his rare off days. We talked about some of the aspects of his career and I thought you might be interested in a little insight into a side of the game we don’t think about much as fans.
For instance, did you know that the refs make their own travel arrangements through a travel service and book their own hotel rooms? When the games are over, they are usually unable to get a flight to their next destination because they fly commercially and there are few fights after 10:00 p.m. or so when they finish for the night.
“It’s not all bad, but after a game you can’t sleep and end up being up until 1:00 a.m. or so,” Pollock said. “It would be nice to jump on a plane and get to the next city because you’re still awake. We have some very early morning trips to the airport because of security.”
We tend to take the games for granted and always assume, correctly, that the refs will be in place at game time. But we don’t see what goes on behind the scenes when weather causes changes in plans. These guys have to keep a sharp eye on the weather and try to stay ahead of problems, but they can’t always do that.
“Last week I was in Colorado on Saturday and was supposed to be going home on Sunday. But then a snowstorm hit the east coast. Brad Watson [another ref] was in Detroit trying to get to St. Louis. I got a call early Sunday morning saying you have to get to St. Louis and do the game because Brad can’t get there. Things like that arise and we all deal with it.”
One thing the refs don’t have to deal with is celebrity. Since the names were taken off the backs of their shirts and the helmets were added, no one recognizes them after the game – which is probably a good thing!
“I always say we’re the “necessary evil” of the game. It doesn’t matter what call you make, half the crowd agrees with it and the other half doesn’t. We take pride in being keepers of the game and it doesn’t matter to us if Team A or Team B wins, as long as it’s a fair game. It is a fast game and calls are missed but they aren’t missed intentionally. If we had our way, we’d be perfect but there’s never been a perfect ref and there never will be.”
Pollock says the new technology makes their job even harder because those of us watching on TV see the play from so many angles, but not necessarily the one the ref has and that is all he can go by.
“In the ‘70s and ‘80s there might have been only one or two cameras following the play. Now there are probably eight to10 and they’re all at different angles - they’re in the net, in the boards. I wish they’d show the camera angle from what the ref is able to see and you’d get a little better perspective on why the call was made or not made.”
But often times the technology will prove that the correct call was made by the ref. With the speed of the game and the number of bodies on the ice, it’s amazing that they see all that they do.
NEXT TIME... PART 2: More inside info from Kevin on how the referees work together on the ice and keep the game moving 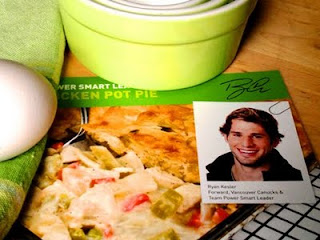 
One day, during the 2011 Stanley Cup Playoffs, British Columbians received a neat little packet in the mail, filled with recipes and tips on saving power. Local celebrities dubbed “Team Power Smart Leaders” offered up some home cooking fun for folks around the province.This type of marketing couldn’t be done in Canada without including a hockey hero, so the packet features Vancouver Canuck, and 2011 Selke Trophy winner, Ryan Kesler.


Kesler’s Chicken Pot Pie is a simple recipe for even the most kitchen-shy hockey fans. Also the power saving tip is a good one: keep the bottom of the heat sources for cooking in your kitchen (burners on a stove, bottom of the toaster oven) free of crumbs and burnt food. "They absorb heat that would other wise go into cooking your food."

Here are the ingredients for Kesler Pot Pie…

Now, considering the fact we are currently fighting a “War on Sodium”, it might be a good idea to substitute that big ol’ can of condensed cream of chicken soup with a low sodium version made from scratch, or at the very least, read the can’s label for the daily percentage of sodium stat and pick the brand with the lowest number.


As a suggestion, you may pair the Kesler Pot Pie with a nice bottle of wine from Bure Family Wines and have yourself a hockey themed Chicken Thursday.


Hey, wait a minute, I just remembered something. My mom gave me a recipe calendar circa 1997, featuring recipes from NHL Hockey moms. If I remember correctly, Calgary Flame captain, Jerome Iginla’s mom had a chicken recipe. Wow…this could be a face off/bake off of Northwest Division rival proportions!!!


Must find the recipe calendar in my giant box of hockey stuff (that would be my office) Stayed tuned for the hockey related chicken recipe face off! Only at Lisa’s Lounge ;o)