The Green Men...Use them or Lose them? 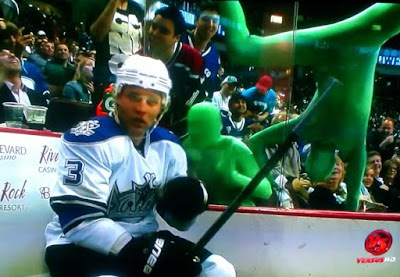 green men working the box in Round One Kings vs. Canucks

The two green men are BCIT journalism students, and they are enjoying some huge face time in the media. But will putting “Green men at Canucks games” on their resumes help them score big time media jobs when school’s done?

“We’ll do anything to help the Canucks win. If we can get the Canucks fans fired up before a power play and it translates to the Canucks scoring goals, that’s what we’re here for.”

Quote from the article, Force and Sully on Canucks.com 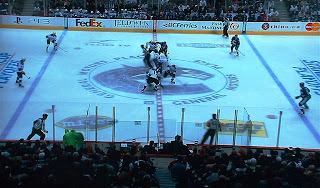 I am on the fence with these two guys. I was at the game in December when they first achieved some exposure taunting Nashville’s Dave Scatchard in the penalty box. I had a good laugh. Anything they’ve done since then hasn't tickled my funny bone like that first time, so if the green men hype comes to a halt I won’t miss them. Maybe I just need to see Force and Sully take their schtick to another level. Perhaps they could add a green baby and a green girlfriend to the show. Come on boys, up the ante for your legions of fans!

And if you would like to give birth to your inner green man, or red man, or purple woman, here’s a place to order your suit....