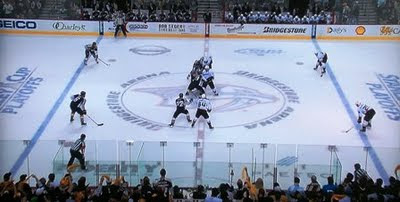 Unlike Lisa and Jan, my boys started their quarterfinal series in Anaheim, California. Game 1 was a 4-1 Preds win. Our captain, Shea Weber scored on the power play and they bore down after that. Game 2 was a 5-3 loss with the last goal being an empty netter. They got behind the 8 ball in the first 5 minutes by putting the Ducks on the power play. Two goals later and the Preds were fighting for their lives. They pulled back to within 1 at 4-3 but couldn’t force the overtime. The Ducks definitely play with an edge and sometimes they cross the line. Late in the game Bobby Ryan stomped on Jonathan Blum’s foot trying to get the puck away from him. This was a costly decision as he is now suspended for the 2 games in Nashville.

Which brings us to Sunday and Game 3 at the Bridgestone Arena and TSN was in the house. The area in between the team benches are usually sold seats but we got Pierre Maguire Inside the Glass instead. The team put on a pre game party on the plaza in front of the arena. But at 5 pm CT, we were ready to rock the Bridge. I hope the folks watching the game on TV got a sense of the intensity of the crowd. Hopefully, it will put to rest some of the critics who say we don’t “get” hockey down here. You better believe we do. We were loud from the player intros on. It was amazing to be a part of such passionate crowd.

Jerred Smithson took a penalty in the first 5 minutes and the Ducks dangerous power play went to work. We managed to kill it off and got on the board with our first goal on the power play. We have had a power play goal in each of the 3 games which is amazing considering our power play has been an Achilles heel for us all season. Jordin Tootoo put a puck home mere minutes later. In fact, our arena announcer (Paul McCann) was announcing Erat’s goal when Jordin scored. We were up 2-0 after one and feeling pretty good. The second period saw the parade to the penalty box continue. Then the ducks went on the power play again and Teemu Selanne made us pay. He scored again 30 seconds later when the puck took a funny bounce off our boards and popped right onto his stick. We took the lead back with a goal from David Legwand. The ducks tied it up. Mike Fisher scored the game winner and the last 8 minutes were tense as we held off the Ducks. The relief and joy that roared through the building when the final buzzer went off was awesome.

Many citizens of Pred Nation were hoarse, nursing upset stomachs and feeling their heart rates return to normal on Monday after such a game. But you can be sure that we will be back loud and proud again on Wednesday night for Game 4. 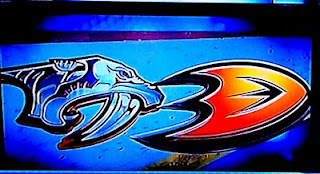