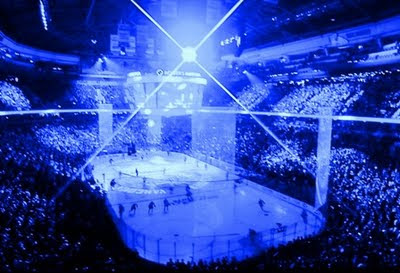 Who is Ben Smith? He’s one Blackhawk player that helped lift the Blackhawks right back into Game Two on Friday night. But it wasn’t quite enough. Once again the Canucks overpowered the Hawks through the first and third periods, throwing big hits, winning foot races, and most of all remaining composed each time the Hawks gained some ground on the scoreboard. The second period and Luongo…not so much.

But for Canuck fans, this was a good enough win, because we’ve lost these game twos in the past two playoff series. It's nice to kick the habit.


85 Hits last night, so the commentators need to come up with a description other than bone crushing when describing hits. Let’s see…bone rattlers, thump rumblers, skeleton scramblers, which one do you like? “That was a thump, rumblin’ hit, Jim!” “Edler just thump rumbled him, big time.”

Now we are heading to the Mad House next for Games Three and Four. Chicago fans must be just itching to see their boys come home so they can inject them with some Windy City love, support, and lotsa noise! Looking forward, It will be interesting so see Raffe Torres return to play after serving a four game suspension. I am expecting big, playoff things out of this guy, and I sure hope he delivers.

Foe me, One not so known tradition that has come out of the Blackhawk/Canuck "annual conference"? Turning on the Team 1040 radio station and listening to the hockey pundits talk about their favourite food and restaurants in Chicago. This is a given. I always get super hungry when the Canucks are in Chicago! So, over the next few days, the fridge will be stocked with healthy snack options, just in case.

Where Have the Green Men Been?

And speaking of traditions or what qualifies as a tradition, there are Canuck fans out there that feel The Green Men are a Canuck tradition. I think I have to disagree with that one. Do any Canuck fans remember "The Clapper" ? Whatever happened to him? The Green Men will one day reside in the "Where are they now file", and for some hockey fans, the sooner that happens the better.

The lycra clad boys were noticeably absent from Games One and Two. Aparently one of them has a "lower body injury" according to a Province Newspaper interview. Also, according to their twitter feed, the subject of sky high Canuck playoff tickets came up in a tweet... "just trying to come up with the $. Tickets are crazy expensive"

The Green Men occupy two River Rock Club seats when they are working the penalized players in the box. I can tell you how much lower bowl season seats not in the Club are: (two seats per game, one game cost listed) Quarter Final $350, Semi Final $420 Conference Final $475 Stanley Cup Final $700.  Now add some more onto those prices to arrive at The Club.

Yes, The Green Men and/or their sponsors require plenty of green to do what they do as they try and get inside the opposition's head.
Posted by L.A. Ovens at 5:55 PM