Canucks/Blackhawks Game Three: A Little Mayhem at the Madhouse 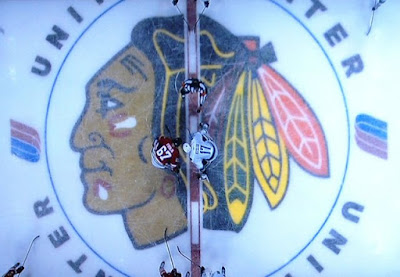 It's not often I dream about hockey. After all the hockey I have consumed and digested over the years, I could probably count on one hand how many times hockey has shown up in my nightly dreams. So Marion Hossa was in my dream Saturday night. Why Hossa, I do not know. We were at a skating practice session waiting for our turn on the ice. He was sitting beside me and he was cold. He said "It's cold in here. I am cold". I remember going through my things trying to find something to give him to warm him up. He took my jacket and put half of it over his legs and them motioned like he would share the rest of the jacket with my legs, yet I knew this would not work. Snuggling with Hossa? Next thing I remember we were skating on a speed skating oval with about fifty other people. That was the hockey related portion of my dream.

Who knows why I had the dream and what it means. But now that the Blackhawks are down three games in this series with the Canucks, cold is one suitable description to apply to the Blackhawks. Now...why can't I have a Canuck related dream?? Guess I don't need to because my hometeam has been so hot in my waking world!!!

Once again, the word composure must be used. The Canucks didn't strike first, got into penalty trouble, they had to kill a five on three, Raffe Torres gave Hockey Operations some food for thought with his big "murky" hit on Brent Seabrook, yet they managed to stay glued together and win the game 3-2.

The big question now is...can the Vancouver Canucks put a finish on the defending Stanley Cup Champs season with a fourth win on Tuesday? And furthermore...how will the league respond to Torres? At least we know the Canucks did just fine without him in the line up through the first two games.

And finally, what will my dreams tell me tonight?
Posted by L.A. Ovens at 11:02 PM