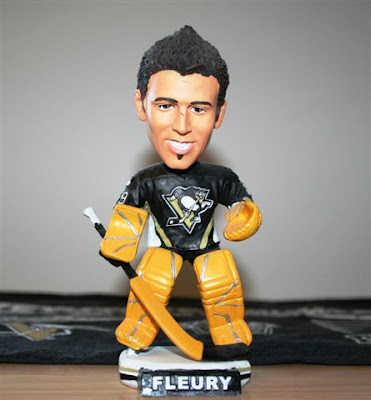 Right, Pens fans? What was NOT to like about that victory in Philly? The outcome was enough to inspire a little disco dancing to K.C.’s happy little song.
Marc-Andre Fleury was Superman (sung by Five for Fighting, a nice little hockey-related factoid) and stopped 45 of the 46 shots that were thrown at him. He stopped them high, low, flat on his stomach, glove grabs – whatever. He was determined to protect his goal and didn’t give up even an iota of space, wrapping himself around the goal post, having his helmet knocked off, it just didn’t matter.
On the other side, Biron faced far less shots but enough of the ones the Pens took went in. Crosby and Kennedy scored in the second and Max Talbot could see well enough through his shiner and added a much-needed empty-netter in the third.
“I tried to go out and stop the puck – that’s my job,” a very humble Fleury told reporter Dan Potash after the game. He certainly did his job tonight. Do you think he may have read what “Hairy” Hartnell said about him after the last game?
“We did a good job [Sunday] of getting to the net, getting second chances and changing the angle of the puck. It seems like he can stop that first shot most of the time. When we get him moving side to side, it seems like we've been getting some better chances and last game we put them in the back of the net,” Hartnell was quoted as saying in The Pittsburgh Post-Gazette. Wishful thinking, maybe? Fleury seemed better than usual in his side to side motion in Game Four.
The Pens did many things well, including winning faceoffs and keeping shifts short and productive. But the best thing they did was to get back to playing their brand of hockey with skill and finesse and avoiding the scrums and fighting that the Flyers like to draw teams into doing. One more game like that back in Pittsburgh on Thursday would be great. That’s the way I’d like it!
Let’s Go, Pens!
Posted by L.A. Ovens at 10:08 PM