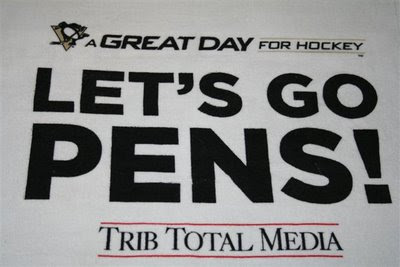 Philadelphia Freedom – Elton John
by Jan Snyder
“As I live and breathe, it’s Philadelphia Freedom!” – we are free of the Flyers, at least until next season, as the Pens found a way to come back from a 3-0 lead by the Orange and Black and wrap up the series.
Mad Max played such a huge role in this game. In the second period, he fumbled a puck that led directly to a Flyer goal. As if determined to make up for that mistake, Max bravely took on tough guy Daniel Carcillo by challenging him. Max took a few punches, but was more than happy to take them for the team against one of the toughest of the tough guys. As Carcillo left the ice after the fight, he urged the Orange Crush- shirted fans to roar louder. Max had his finger to his lips trying to “shush” the crowd!
After Max’s heroics, the rest of the team lifted their games and Fedotenko quickly scored the Pens first goal. Closely following was Mark Eaton who potted another one. Sid got in on the act too, knocking a puck out of mid-air and into the goal. Fleury continued to make the big, important saves when he needed to and kept the Flyers off the scoreboard.
Onto the third period – tied! This had to be a big letdown for the Flyers, especially after being up 3-0 at the end of the second period and a big momentum-gatherer for the Pens who were feeding off each other.
The teams battled, but Gonchar found the net and Sid found the empty net to end the game and the series. Handshakes all around! Farewell, Philly!
This was an exciting series and a tough one for the Pens to start their quest. Games won’t get any easier though as they take on the next opponent, whoever that may be.
Until the other series are decided, we won’t know who comes next. We do know the guys will get a few days to lick the wounds inflicted by the Flyers and to get some rest. No pressure of a seventh game at home, just preparation for the next series.
We could see the Bruins next, Carolina, Jersey or the Caps. Boston is on a big roll and ruled the East most of the year. Carolina is dangerous, with Eric Cole back and another Staal brother, Eric, not to mention Cam Ward in goal. What else can you say about Jersey except Marty Brodeur, the goalie with the most wins in the history of the NHL? And the Caps come with Ovechkin and company, so any of these would be worthy opponents.
But whoever the Pens face next, they will be ready to start over again in Round Two. Journey had a big hit with Who’s Crying Now – it’s not now and never was Sidney Crosby! He effectively silenced the crowd and said after the game that he enjoyed the “silence” after his goals. Now he is free of the Flyers and free of their “chanting” fans.
Let’s Go, Pens!
Posted by L.A. Ovens at 10:44 PM