The Lemieux’s son, Austin, weighed only two pounds when he was born at Magee-Womens Hospital in Pittsburgh. He subsequently spent 71 days in the Neo-natal Intensive Care Unit. Her husband was playing hockey for the Pittsburgh Penguins, her family was back in Canada, and she already had two daughters to care for while Austin was hospitalized.

On Mother’s Day, she went to visit Austin. She asked the nurses to look after the little girls so she could have time with her baby son. Of course, that’s not the nurses’ job, so this brand new little baby and his mother only had 15 minutes to spend together on Mother’s Day. 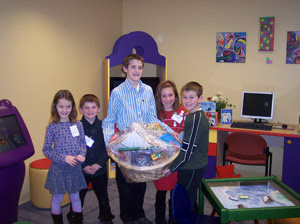 Austin and friends
Austin has grown into a perfectly normal 13-year-old but that experience during the first months of his life led Nathalie to devise the idea to raise money for playrooms at Pittsburgh area hospitals where siblings of other sick children had a place to engage their lively minds and provide a comfortable, calming environment for them. By the end of this year, 20 Austin’s Playrooms will be in full service for local families.

“Besides having them in Neo-natal Intensive Care and Oncology Departments, we’ve now started playrooms in ERs, too,” said Nancy Angus, Executive Director of The Mario Lemieux Foundation. “Austin goes to every ribbon-cutting for each of them. His parents are such normal people and they want to teach the kids the value of helping others.”


The newest to open are two playrooms in the brand new Children’s Hospital of Pittsburgh. One is on the first floor for well children and another is for in-patients on the sixth floor. 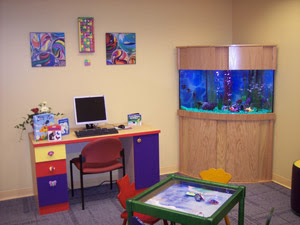 A fun place to be!

“Each playroom is decorated in primary colors. We try to include an aquarium, TVs, DVDs, and a computer kiosk with a Carnegie Mellon University-designed touch screen,” Angus said. “The kids seem to like the sand table. Magnets hold boats and cars in the sand and they can be moved around. This really is Nathalie’s pet project and she is involved in all aspects of the design of the room.”

The foundation was created in 1993. Mario was enjoying the greatest season of his brilliant career when he was diagnosed with Hodgkin’s disease. After waging a successful battle against the disease, Mario has remained cancer free, but his experience led him to focus on ways to assist those not so fortunate. He devotes much of his time to the Foundation, raising funds to help reach the ultimate goal: a cure for cancer.


“Mario makes phone calls to children afflicted with cancer and does all he can to lift their spirits,” Angus said. “Whatever he can do, he wants to do. He meets and talks with cancer patients often.”

As Foundation Director, Angus is busy right now with preparations for the Mario Lemieux Celebrity Invitational to be held in June. The golf tournament annually draws sports stars from across all sports. The Steelers are always well represented, as are the Penguins. “Sidney Crosby always comes to play in the tournament.”


************
I want to thank Nancy Angus for her time and for talking about The Mario Lemieux Foundation with me. None of us is spared from the pain of the disease.


My brother, Paul, suffered from colon cancer. He was battling and we all hoped for a miracle. We were able to get Paul to a celebration for Penguins’ broadcaster, Mike Lange through the kindness of radio personality, Jim Krenn. Paul loved hockey and Mario was by far his favorite player. Mr. Lange knew of Paul’s illness and was so gracious to my brother and to all our family. At one point in the evening, he came over to Paul and said, “I want you to come with me for a few minutes.”

When Paul returned about 20 minutes later, I asked where he’d been. “I just met Mario Lemieux,” he said. Knowing how my brother liked to tease me, I replied, “Oh, sure, you did.” He looked at me; I saw how his eyes were lit up like they were on Christmas mornings when we were kids. He said, “I’m not kidding, I just met Mario.” I realized he was serious. Mike Lange had taken him to an upstairs room where Mario stopped in to offer his congratulations to Mike. So in character, Mario didn’t want to “appear” and steal the evening from the guest of honor, so he stopped by quietly.


Thanks to the kindness of Mike and Jim, one of my brother’s dreams came true that evening. Mario and Paul had a nice chat. Mario gave him encouragement, told him to be strong for his family, and to fight the cancer. They talked a little hockey too. That was in February 2002. Paul lost his battle on June 22, 2002, but none of us will ever forget what Mario did for him that night with just a brief conversation. For what he did, Mario will always be my hero. And just imagine how many times he has done something like that and touched people all over the city.

If you have a few minutes, visit http://www.mariolemieux.org/ and learn more about the good work they do.

We all thank Mario for great hockey memories but if you are too young to remember his playing days, also remember that this fantastic team we have probably wouldn’t be in Pittsburgh now nor would they have a new arena under construction if it weren’t for Mario. Maybe you can pay it forward with a donation to a cause that is so close to him, Nathalie and all their family.