by Lisa Ovens
It’s the final four, and we have some interesting swag competing to make it to the finals. It’s one thing to be a hot team, but to be an even hotter piece of hockey swag takes the game to another level. In the West...

Detroit Red Wings vs. Chicago Blackhawks
Wings lead the series 1-0
The Detroit Red Wings are quite at home in the Western Conference Finals, and don’t they look good there. We are used to seeing them with beards. It’s very normal, very natural. Chicago’s Nikolai Khabibulin will be busy. He’s already faced 43 shots in Game One. This must be shocking after the shot challenged Vancouver Canucks, huh?
It seems like the only team everyone wants to talk about is the Chicago Blackhawks. They’re the kids. In Brady Bunch terms, they are the Cindy/ Bobby team even though they finished Peter/Jan in the standings.
Don’t get me wrong, the rebirth of NHL hockey in the Chicago's large market is great news. But we can’t forget the staying power and pedigree of the Detroit Red Wings. If the Wings can take Game two at home, don’t be surprised if the pundits and analysts start giving the Wings their due.
After watching the Blackhawks take out the battered Flames, and the melt down prone Canucks, they now have the big test: will their comeback skills see them through a series with the team that makes everyone suffer from “Wing Envy”? 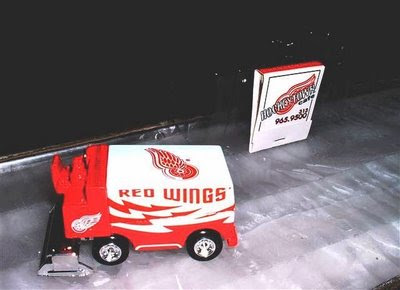 It doesn't matter what DRW swag I show here: the Wings keep winning! I could take a picture of a red napkin, post it, and the Wings will win. But right now, I think this adorable little Red Wings Zamboni fits the bill rather nicely. Another score from my 2004 Detroit trip, this Zamboni was gifted to my good friend, Helen and it helps keep her desk nice and clean! This pic was shot at the bar of the Hockeytown Cafe, and the Zamboni sits on top of a real ice surface built right into the bar. Cool, in every way! 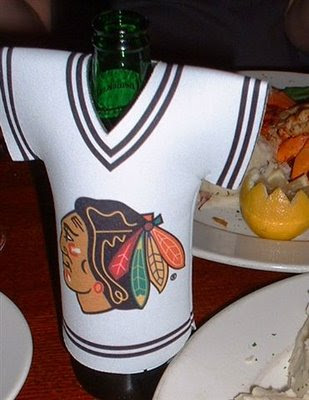 As I mentioned in the first round swag OFF, I took this Chicago Blackhawks beer cozy out for a night on the town. It was the first time I used it since the acquisition in 2004. Imagine how much B. Hawks swag is being used for the very first time right now in Chicago? It was just under two years ago I had a short layover at O’Hare International Airport and nary a B. Hawk logo could be found in the gift shops. (That’s my test for gauging an NHL team’s foothold in a city – by the amount of logo’d trinkets one discovers at the airport...try it out on your next trip!)
Up Next...The Eastern Conference SWAG OFF...
Posted by L.A. Ovens at 12:07 AM