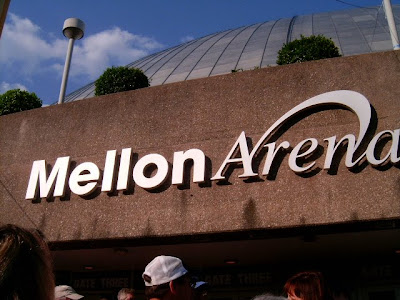 
Game Five in Pittsburgh! Billy Guerin is back in and Letestu is too. Fedotenko and Ponikarovsky are out; would those personnel moves make a difference?

Starting much like they left off the other night, the Pens and Canadiens battled right from the drop of the puck. Mike Rupp slapped a puck that hit Halak on the side of the head and left him a little groggy. The Pens tried to take advantage of that and kept firing shots at the goal, but with no luck.

With just a little over two minutes left in the first period, the Pens went on the power play. Making up for what happened in the last game, Kris Letang scored, assisted by Geno and Gonch. The Pens decided to then play a little game amongst themselves called “Let’s See Who Can Check their Guy the Hardest”. Bodies were flying!

Montreal then got its own power play but couldn’t score. In one great sequence, first Halak made an impossible save, and then Fleury did the same at the other side just as the period was ending. 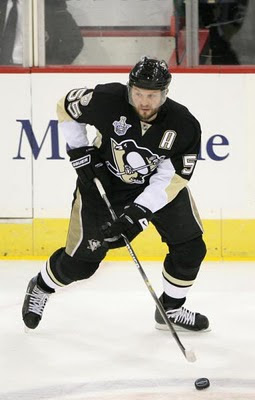 In the second period, the defense went into action, as Gonchar scored assisted by Orpik. Geno was on a mission and although he didn’t score, he did everything but. He was everywhere, even at one point, imitating Sid’s dance behind the net. Seeing his parents in Mellon Arena again was a nice treat and having them there seemed to give Geno some extra jump in his step!

Then the real nerve-wracking part of the game started. With just a couple of minutes left, Montreal went on the power play and threw everything they had at Fleury. After he stopped several bouncing pucks, one got through him and the score was 2-1. Could the Pens hold them off? They tried to score again, but struck out on three attempts at empty net goals! But even with that, they were able to successfully defend and wrap up game five with a big win.

Again the goalies were the story, but Pittsburgh’s defense got a big assist in the win. Sid worked and worked, but still couldn’t score and in fact, was one of the ones who missed an empty net! Since Hal Gill was injured in the game, we’ll see if Sid can come out firing (and less impeded) on Monday back in Montreal. Guerin again made a better door than window in front of Halak and Letsetu had an assist.

• Sorry those guys dressed up like green beans (instead of human bein’s) in Vancouver have got to go! They are adding nothing.

• Quite a comeback last night for the Flyers. They live to play another day.
Posted by L.A. Ovens at 11:53 PM