The View from Smashville 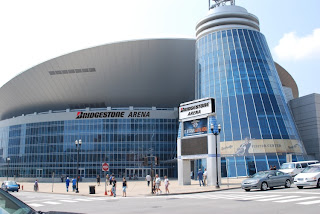 by Marie Miesel
Lisa did a nice job summing up games 1 and 2 in Vancouver!

I do have a funny story about game 2 before moving on. I was on our message board np.com chat room for game 5 against Anaheim. I was very frustrated and decided to turn the game off. As you all know the Preds tied it in the dying seconds of regulation and then won it in OT. A mojo/superstition was born. Prior game 2 in Vancouver, I had promised to log off if we were behind. With 9 minutes left, I logged off. And we tied it up in the last minute. I furtively followed the first OT. I came back to the chat room for the second OT and was able to enjoy the win with my fellow fans.

Games 3 and 4 were at our house on 5th and Broadway. The front office decided to go with a “Gold Out” theme. Bright yellow T-shirts and towels were on every seat. We supplied the noise. We are getting noticed for our vocal commentary on the game action. TSN, CBC and even a French language paper in Quebec have done stories on our fan base. Alas, the power of Gold was not enough. Game 3 was a 3-2 OT loss with the game winner scored on a controversial power play. It was also Ryan Kesler’s coming out party. He had 2 PPG including the game winner.

Game 4 the crowd came back with the same energy but again the Preds struggled offensively. We lost 4-2 with goal #4 an empty netter. Kesler drew another penalty. This time on Ryan Suter and proceeded to score the game winner on the PP. Heartbreak at the Bridge. I wanted to cry. I had intended to wish all my hockey buddies a good summer. But I didn’t. Perhaps part of me knew that just maybe we would get another home game.

Game 5 and Hockey Night in Canada. The biggest hockey stage outside the Olympics and World Jrs. Most Canucks fans were predicting an easy win. Time to get rid of those pesky, no talent Predators. I didn’t hold out much hope myself. The Canucks have been are a better team statistically and have outplayed the Predators for the most part. Pekka Rinne has been a major reason we have been able to stay in the previous 4 games. And there was Ryan Kesler, itching to make our defense look silly again. And he did. He had 2 goals in the game.

But as it happened against Anaheim, where Nick Spaling, Jerred Smithson and Matt Halischuk entered Predators lore, another unlikely hero stepped up. Joel Ward, a product of the Canadian University hockey system, scored 2 goals and played his heart out on defense. David Legwand also scored twice including once with a little help from Alex Elder. No offense Canucks fans, but fluky goals still count.

And we Preds fans know a little something about fluky playoff goals. First round 2009 playoffs, game 6 against Detroit. Nik Lidstrom shoots a puck from the neutral zone at the end of the period. It takes a funny bounce and pops right over Dan Ellis’s shoulder. That shot ended our hopes of getting past the Wings. First round 2010 playoffs, game 6 against Chicago. Brent Seabrook shoots the puck down the ice on a dump in; it deflects off Patrick Kane’s skate at the blue line and bounces in. I wouldn’t be surprised to see another fluky goal in Game 6 Monday night. Though, I do hope it’s ours. 8-)

And now a word from the soapbox. The internet is a wonderful tool. Being able to post on hockey message boards, meet other fans and discuss hockey with a wide audience is great. Sadly, it is also a vehicle for the petty, mean spirited and downright ignorant to inflict their views on the general populace.

Our moderators have been very busy editing and banning “trolls” who seem to have no purpose other than to stir up trouble and act like fools. I’m sure the Canucks moderators have had to do the same. Participate in a discussion but don’t descend into name calling and other childish behavior. Hockey fans are the best fans in the world. Let’s show a little class and treat opposing fans with some common courtesy.

Tomorrow night is another home game. Hard to believe we are still playing. Another chance for the Preds and their fans to stand together. Win or lose, I am proud to be a citizen of Smashville.