This week the Vancouver Canucks will be retiring sweater number 19 and celebrating the hockey career of long time Canuck, Markus Naslund during a very special pre-game ceremony at Rogers Arena on Saturday Dec.11,2010. This week, I will offer up some of my personal Nazzy moments I’ve collected over the years ,as I celebrate one of the Canucks most talented players and one of my all time favorites. 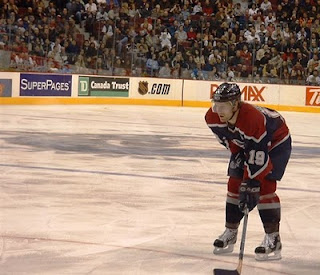 I've decided to begin with an excerpt from my first book, Hockey & High Heels. It's from the 2002/03 season, a time of pure excitement for hockey in Vancouver. A time when the legendary sell outs began. A time when the city was fascinated by a trio of "brothers from other mothers" who lit the lamp, over and over again. The following is a page from my game diary that was published in the book... I was so impressed with a goal that Markus Naslund scored (but mostly I was impressed with the way he scored it) that I wrote about it  as an example of the importance of playing with patience. It became a highlight reel goal, and I was so pleased so see it happen right in front of me.

Author's note: My mom, Stella is in this excerpt, and I should offer a little of her back story so everyone who didn't read the book will understand: my mom was the youngest of 18 children and she was a child of the Depression - it'll all make sense as you read on...

I was thrilled to host my mom for tonight’s game. Although we went to countless football games starring my brothers, this was the first time we were going to a live professional hockey game together. This was special. Plus, I bought the single seat beside us for Stacey as a birthday present. Also, today was January 26th, Phoenix Coyotes’ managing partner, Wayne Gretzky’s, birthday. Hope your birthday was a great one, Wayne! But, would the Canucks spoil the Great One’s day, by defeating his Coyotes?

Mom, Stacey, and I dined in the Brew House Grill, high above the ice, before the game. This gave us an opportunity to catch some of the Super Bowl on TV. As I watched the football game, I couldn’t help but think of the NHL’s Stanley Cup Playoffs just around the corner. The Canucks hope to prove themselves as a Playoff contending team, an elite team, and a team to be taken seriously. Could this be their year?

Only one puck made it past either goaltender tonight. The sold out, Canucks crazy crowd had been quite anxious for a goal. Thanks to the statisticians, the people whose job requires them to record EVERY possible streak or slump any given team could find themselves in, the Canucks have been held in a ‘not scoring the first goal’ slump for the last 11 games.

Finally, this ‘not scoring the first goal’ slump came to an end, and this goal happened to be one of my favorite goals this season. It all happened where important work is done during a hockey game. Bertuzzi had passed the puck to Naslund, positioned in "the Office" behind the Coyotes’ net. Naslund stood there for a moment. Would he go to the left, or to the right? Oh, he’s going left, no right, NO, left, again. The Coyotes were doing their job defensively as Markus faked his moves, back and forth.

I turned to my mom on my left, and said…

Lisa: Mom, what do you think Markus will do?
Mom: He doesn’t have room to do anything right now.

I took a sip of my beer, turned to my right, and asked Stacey…

Lisa: What do you think Markus will do with that puck?

Markus is still there, faking left, then faking right.

Stacey: Hmmm, I’m not sure. He could try a pass and possibly assist on a goal, but Nazzy doesn’t have an open lane to make such a pass. Jimbo Jumbo Peanut, Lis?

I ate my peanut and looked at Markus. He was still behind the net. He’s going right. NO, left again. I looked at my mom again. She’s sitting on the edge of her seat. But she’s a patient woman. She once told me that when she was a child, they only had one toy to play with, and she literally had to wait days for her turn to play with it. Mom was the wife to my impatient father. A mother to us children whose catch phrases included, ‘Are we there, yet. But, I want it now. I can’t wait…’ My mom is the most patient person I know. But Markus Naslund was quickly becoming a close second.

The Coyotes’ goaltender must be growing tired of shaking his head from side to side. Markus Naslund made everybody wait. More importantly, he made himself wait. Finally, the time became right. He snuck around the right side of the net, and with a flick of his wrist, roofed the puck right into the corner. Yes!

These days, I don’t know which is faster: Hockey, or Life itself. But, I do know patience is a virtue, a skill required, yet often forgotten, in both arenas.

Great goal, Nazzy, and totally worth the wait.

If you enjoyed this excerpt, you just might enjoy the rest of the book! Visit the Shop at h&hh.com to get a copy at a very special price

Puck photo by Andrew Lavigne (With Glowing Hearts- The Movie)
Posted by L.A. Ovens at 6:49 PM