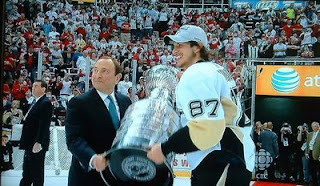 Oh, what a journey and what a great ending! Although the first game seems like it was only a few weeks ago, now the season is over – after 87 games. We as fans couldn’t have asked for any more from our team. They did everything they had to do and their persistence brought Stanley back home to Pittsburgh where he belongs. He’s been gone a long time and welcoming him back to town will be so much fun.
Max Talbot 2, Detroit Redwings, 1. What a game Max had and to hear him talking after the game about his relationships with Fleury and Sid was amazing. I remember the last two times the Pens won the Cup how perfect it seemed to see Mario raise it above his head. I have to say I had the same feeling when I saw Sid do it last night.
How lucky are we to be fans who have seen Mario and Jagr and now Sid and Geno? Speaking of Geno, winning the MVP Award for the playoffs was the perfect ending for him. He meant so much to the team the whole year and his stellar play every night was something we shouldn’t take for granted.
Fleury? What an amazing guy. To be pulled out of a game and then come back and play two of the best games of his life – amazing. We have to mention the Coach too. Dan Bylsma’s youth, his enthusiasm and his steady hand guiding the players was such a big part of this victory.
All the defensemen have to be commended for the job they did all throughout the playoffs. They scored, they checked, they hit, -- they did it all and so well.
As I’ve said many times before, this is the ultimate team game and to win the Cup takes the ultimate team. These guys clearly played for each other.
Now only five short months after the Super Bowl Parade, we have another parade to look forward to – in much nicer weather.
Just a word about Marian Hossa – he made the wrong choice, but if he hadn’t left, we wouldn’t have had Guerin, Fedotenko, Kunitz or Satan. Poetic justice, right? The Pens fans at the Joe tonight were loud. I can’t believe the Detroit fans didn’t try to drown out the “Let’s Go, Pens” chant. Of course, I can’t believe the people in Detroit booed Sid getting hurt either – did they all live in Philadelphia in a prior life?
I enjoyed seeing Mario have that Cup over his head again and seeing Eddie Johnson do it again was special too.
Thanks to all of you who’ve read these playoff columns and thanks to Lisa Ovens for giving me a forum to write about our fantastic Pens.
I’m exhausted and running out of words to say! But we ARE the Champions – that says it all.
We are the champions - my friends
And we'll keep on fighting - till the end -
We are the champions -
We are the champions
No time for losers
'Cause we are the champions - of the world –
Posted by L.A. Ovens at 1:24 PM