So here we are – Game Seven! I’m not a big fan of numbers, but this one really struck me when I heard it today.
Throughout the playoff season, so far there have been 86 games played. Meaning Game Seven Friday night in Detroit will be Game 87! What an omen that could be for Sid. If I lived in Pittsburgh, I think I would play that number on Friday. 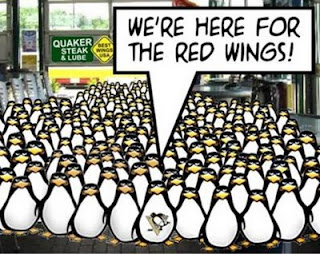 Watching Sidney Crosby being interviewed after practice today, I could see the gleam in his eye. The excitement leading up to the game is palpable and evident on the player’s faces on both sides. Coach Bylsma is covering his emotions well but you know the butterflies in his stomach tomorrow will feel like birds. They are saying all the right things, but you know that they are thrilled beyond words to be in the situation they are in right now.
The entire 2008-09 NHL season comes down to this game. Remember when the Pens were so far down in the standings that we weren’t sure they would make the playoffs? Remember Coach Thierren, after he was dismissed, saying this team was too good not to make the playoffs? Remember the fun as they won and won and won and climbed their way back up the ladder? Remember the great series against the Flyers? The Caps? The Hurricanes? And now we are at the pinnacle.
Hopefully our two-headed monster will be roaring, Flower will be in full bloom, and Staal and Kennedy (Kennedy!) will continue to be the best third line ever. I love Mike Lange’s latest goal sayings for Crosby and Malkin and I sure hope he gets to use them in Game Seven. “Slap me silly, Sidney!” and “Make me a milkshake, Malkin!” But I’ll settle for “He shoots and scores!” or “Scratch my back with a hacksaw.” Just so he gets to use a few and we get a few more goals than the Wings.
Tomorrow at lunch time, I’m heading to a local Pittsburgh establishment called Steel City Pizzaria here in Texas. It’s a full-fledged Pittsburgh sports bar and restaurant with Penguin, Steeler, Pirate, Pitt, Penn State, etc. decorations. The place is of course run by a family from Meadville, PA. Three other Pittsburghers who I work with are going too. We will have a root beer toast to the team and a mini pep rally. We’re taking our rally towels! Hope all of you will be doing something similar because tomorrow is going to be a long, long day – right up until the drop of the puck!
When I tore off my desk calendar page today, the little blurb read: In 1980, the Pittsburgh Penguins proudly pulled on black and gold uniforms after the Steelers won the Super Bowl and the Pirates won the World Series.
Another omen? The Steelers did win the Super Bowl this season after all.

What a terrific season it’s been. But after Game Seven, hockey is over until September. What will we do with ourselves throughout the summer? Hopefully, we can remember dancing with Lord Stanley.