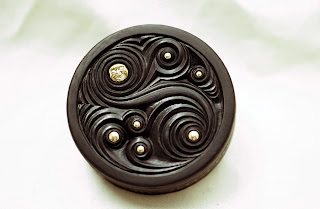 As a hockey culture enthusiast, I’m always fascinated by the artistic things people do with hockey. I’ve draped my body over hockey stick furniture crafted by individuals who’ve dubbed their work functional art. I’ve gazed at more than my share of hockey paintings, too. I’ve even created my own showing of hockey art photos. But when I came across the $20,000 hockey puck I was instantly excited. How many artists out there work in vulcanized rubber??

Vancouver artist Robert Chaplin did, and I fell in love with Rondelle (French for hockey puck), a carved puck inlaid with polished gold. Before I get into a “Starry Night in Canada”, We should talk about Robert’s all time hockey stats. “I had the shortest hockey career ever,” says Robert “The skates hurt my feet. I was cold. My mom said if I was going to be a baby about it I should quit. So I did.”

And that’s when Robert devoted his brain completely to art. That’s not to say he doesn’t have hockey in his life. Rob is one of the founding fathers of the Blood Alley Road Hockey Association in Gastown (an historical Vancouver neighbourhood). Although the association is currently dormant, Robert has fond memories of playing road hockey. “When I figured out I was actually a left-handed shot, I finally felt some joy when playing hockey.” Beyond road hockey, Robert has one NHL ritual. “I watch one hockey game per year, the Stanley Cup Final.”

I did meet his brother Malcolm at one of Robert’s shows. Malcolm lives in Northern BC, and plays on a recreation hockey team. Malcolm told me his team plays a variation of  the dump and chase. It’s called dump and wait. I asked Robert if he’s ever seen dump and wait in action. “What?” was his reply. Never mind. Now for Robert’s art stats.

Robert Chaplin is an elected member of the Royal Canadian Academy of the Arts, has a BA in Fine Art, is an award winning published author, an expert sculptor, has had work sold at Christie’s in New York, and has created one of the most beautiful object du hockey I’ve ever seen. The fact that it is also an official NHL puck makes it even sweeter for this hockey fan to hold in her hand.

I slowly run my finger tip around the swirls, until I stop at each gold inlay star. Six stars, just like a team on the ice: five skaters and one goalie. The largest inlay is the moon, and its face makes me giggle. Yes, this puck is something to hold. The future owner of Rondelle may have trouble putting it down.

Robert may not know the finer points of dump and chase and the lesser known dump and wait, but he has created the perfect setting for hockey on the face of this puck – a starry night, a game to play… and the moon is your biggest fan.


The $20,000 Hockey Puck article was previously published on farparker.com
Posted by L.A. Ovens at 2:10 PM