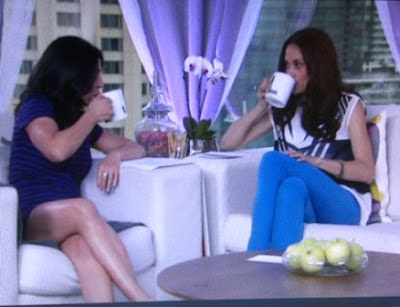 Well, we can all breathe a sigh of relief. Game One of the Stanley Cup Final round is in the books, with a sweet overtime victory for the LA Kings. I’m sure the women and crew from Whilethemenwatch are also feeling some relief after getting their first Hockey Night in Canada show under their belts.

Like many, I was surprised that a show that openly discussed topics often banned on hockey message boards was getting this kind of exposure. However, I wasn’t one of the people to boycott the show last night. As concerned as I was about how this show wound up on HNIC, I still planned on giving it some time before I got into the game.

Over the last ten years I have studied women related sports ventures and the careers of various hockey media women. In my second book, For the Love of Empty Net Goals, I created a special section listing milestone achievements, firsts, failures, female hockey jersey debacles, and issue riddled marketing campaigns to name a few. Whilethemenwatch is another entry to throw onto the research pile.

Now, onto my experience watching the first period of Jules and Lena’s Whilethemenwatch… 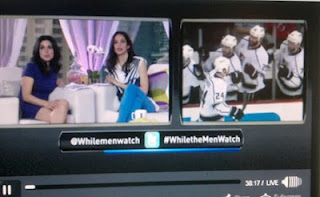 For readers in the United States, here is a photo of the set up as it looked on my computer screen. Ladies on the left, game on the right. I also had the game on my TV as well, which was running ahead of the online stream.

A B&W skit opened the show, with Lena and Jules channeling Lucy and Ethel having a telephone chat, gossiping about "these two women who were going to be hosting a new show on HNIC". Eventually they hang up because the game was going to start so they had to go take care of the men.Obviously this opening  was their way of responding to several days of backlash. Then the real show began.

Show hosts, Lena Sutherland and Jules Mancuso had some help from producer/camera operator Sonny, as well as Jamie Ordolis, Senior Producer of CBC Live, who sitting off to the side. As you can see the set was pink with white, but instead of the girls sipping from martini glasses, they were holding big, manly coffee mugs. There was plenty of chatting, with Sonny either fielding hockey questions from the hosts, or he was reining them in towards something that was going on during the game. They all seemed to have a nice rapport going, and the host themselves seem to be very friendly women.

At times I was distracted by the twitter feed scrolling down the right side of my screen, but it did serve a purpose. Everyone loves prizes, so the show became interactive, getting viewers involved by tweeting photos of them watching the game and who they were watching the game with to be used as an entry to win some swag. I did see some tweets from people getting involved amongst all tweets, good and bad for #whilethemenwatch.

The one bit I liked was when they spoke about a cheer that had something to do with the movie, Scarface. I thought the cheer sounded kind of cool, and I even tweeted asking for the spelling of the word they cheered, but never got a response. Wish I could share that with you.

Once the Boyfriend of The Game portion of their shtick began I really wanted to stop watching, but it seemed to go on and on. For me, it was bizarre and somewhat unpleasant to see two grown women get into such an elaborate procedure in order to choose the best looking players on the ice. I realize the premise of the show has been set up as if we are eavesdropping on them “while the men watch” and they obviously had to add some props into the Boyfriend mix because this is taking place on camera. But this kind of content, along with the "Hall Pass" game really belongs on a Cougar Dating website.I did find myself getting more into the game itself at this point. Couldn't help it: I love hockey, and it was hard to stay with their talking .
After the game, I spent some time reading the twitter comments directed at Jules and Lena’s show. I didn’t spend any time with the horrible insulting tweets, because no one deserves that kind of treatment, but instead focused on the more constructive ones written by women.

It is clear to me that a female run hockey show, with the right content, could be accepted by both female and male hockey fans. It was clear to me ten years ago when I started my Hockey and High Heels project. I wouldn’t have started writing my first hockey book if I didn’t discover there was a community for it.

Watching the WTMW debut last night did inspire me. I'm inspired to share the knowledge I've gathered from ten years of “Watching Women Watch Sports”, and go beyond consulting with hockey teams. It inspired me to develop my own ideas for shows that I’ve written down over the years, and I encourage other female hockey content writers to do the same. If we are not pleased with a show like Whilethemenwatch, and know we can do better, we should make it happen.

When I looked at what Jules and Lena have accomplished in a year, I was both impressed and baffled at the same time. Myself, along with other women hockey content creators know how hard it is to get a foot in the door. In my column yesterday I asked out loud in the CBC's direction, just how did this Whilethemenwatch concept make it onto Hockey Night in Canada’s platform? Finally I found the answer in an article posted on avclub.com earlier today. It was in an interview conducted by John Semley (link is here). Here's the telling excerpt...

AV Club: How did this deal with the CBC come about?

Lena S: It was through a friend of my husband. There were some emails back and forth, and the CBC asked us how we could work together for the Stanley Cup Finals.