Step Back from the Ledge! 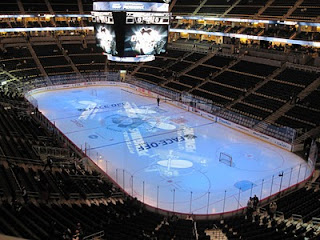 Okay, so the Pens have lost their first two games. If this had happened in the middle of the season, would a two game losing streak be enough to panic over? I think not. Let’s take a big, deep breath and see what happens next.
The second game in Consol was much feistier and closer than the first game. After all, a Pens/Flyers game with no fights?? No matter how much the players tried to downplay going up against Montreal, while I was watching, I couldn’t help but think that loss that put the Pens out of the playoffs was still at the forefronts of their brains. The Pens played better, more shots, etc., but again, the goalie, this time Carey Price, was the difference. Geno raced around like a demon and the defense looked more together than they did during the first game. Let’s remember we have several new defensemen trying to learn the system and they are doing just fine.

I thought booing P.K. Subban the entire game was a little over the top. He accidentally cut Jordan Staal’s foot last year – hardly enough to indict him for a crime! Maybe once would have been enough! But then a penalty was called when it looked like Subban fell onto a Pens’ stick, but he was bleeding, and that led to the penalty and more vitriol aimed at him the rest of the night. 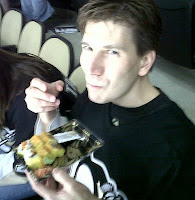 So back to the Consol. I explored a little more during the second game, hoping to run into ESPN hockey guy John Buccigross, who was attending the game, but I never saw him. We did find Dairy Queen and the sushi bar! Jim, my son-in-law, tried the Pittsburgh Roll – what made it a Pittsburgh Roll? The seaweed was gold/yellow and there was a splash of something black on top! Jim’s review was okay, not great.

I found more Pens Gear places scattered around, not just the one big store on the first level. We noticed too that the vendors who walk the aisles hawking beer, cotton candy, etc. seemed to be fewer in number, but maybe that was just our imagination.

The two new Zambonis are sponsored by some company that makes armor and heavy metals – don’t quite see the connection, but whatever. Also, during the first game, the arena announcer kept saying, “Ok, fans, the Pens are on the (sponsor name) Penalty Kill!” What?? It’s bad enough to hear, “Fans, the Pens are on the (sponsor name) Power Play!” but at least we, as fans, can get a little excited about that. But the penalty kill? At the second game, we were not urged to do whatever it was they wanted us to do during a penalty kill! I realize this sponsoring stuff brings in big bucks, but it’s so annoying. And I’ve only ever heard it before in the minor leagues.

*********
Happy Thanksgiving to all of you in Canada! Hope you stuffed yourselves with turkey!

********
I happened to be watching the Caps/Thrashers game when the Atlanta goalie fell to the ice. What a scary sight that was! He was so still and so many people were rushing onto the ice that I expected a really bad outcome. Glad to hear that it was a fainting spell and Pavalec was released from the hospital. 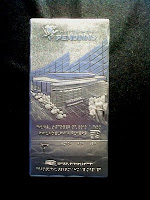 In my column about Opening Night, I completely forgot to mention the beautiful hand-forged commemorative tickets we fans received as we entered the building. What a fantastic keepsake from a really special evening.
Posted by L.A. Ovens at 11:31 PM