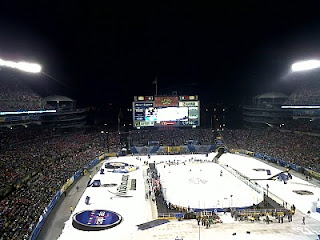 According to the calendar, spring follows winter. At the Winter Classic, the opposite seemed to be true. As we drove up to the parking garage, the temperature outside on the evening of January 1 was 56, a cool spring type of temperature, not what one would expect on a winter’s night in Pittsburgh.


But all that would change over the course of the evening. Walking from the garage to Heinz Field took about 15 minutes. We were surrounded by 68,000 other fans longing for the same fantastic experience we were about to have. My sister, Kim, and my brother-in-law, Don, were my hockey companions for this special evening. The streets and sidewalks were chock full of fans – Pens and Caps. Most everyone was in a festive mood that first night of the New Year with the occasional, “Let’s Go, Pens” cheer bubbling up or “Let’s Go, Caps” depending on where one happened to be. As we strolled along, some Pens fans behind us started an “Ovie Sucks” chant aimed at a lone Caps fan in a #8 sweater. Good natured fun, no harm intended. But I think the fan may have felt a little outnumbered. Keep in mind that we walked toward a football stadium to watch a hockey game, but the guy’s comment was still a little strange. His comeback to “Ovie Sucks”? “You might think he sucks, but wait till he scores in the first inning!” Okay, maybe it was the beer talking.

Music blared, horns honked, people cheered – just another exciting sporting event in Pittsburgh. Once inside Heinz Field, we began the walk up the ramps to our seats. No matter how often I’ve seen it, the Pittsburgh skyline always takes my breath away. The city served as a perfect backdrop for the big game about to be played. As we climbed, we stopped to take pictures and other fans asked us to take their picture with downtown as the background. Pittsburgh shines in prime time! 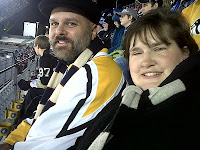 We found our section and row, but our seats were about in the middle, so we had to maneuver through some other fans. As I walked by, I thanked everyone for standing to let us by. One older gentleman said, “No matter, the important thing is that you’re here!” Very sweet sentiment – I think he should be employed out at the entrance way to make people feel welcome and comfortable.

I looked out at the field and was dazzled by the white of the ice against the black of the sky. The stands packed with Caps and Pens fans rocked in anticipation. Caps fans seemed to be in packs throughout the stadium. My sister described it nicely when she said the pockets of red looked like an infection spreading through the crowd! The large group of Caps fans seated in front of us were having a great time. They cheered for their team and urged them on – I have no problem with that – I would do the same in their rink – or football field. I don’t like it when one team picks on the other, but I respect everyone’s right to cheer. I did feel like these fans could have been a little more original than, “C-A-P-S – CAPS, CAPS, CAPS”. If one of them were dressed as a fireman, I wouldn’t have been surprised. (J-E-T-S – JETS, JETS, JETS).

The whole experience of the Winter Classic was, well, classic – not to mention classy. After the anthems, one lucky soldier strode out to center ice along with Mario Lemieux, Franco Harris and Jerome Bettis to drop the ceremonial first puck. Mario heard the chorus of “Mar-i-o, Mar-i-o” as he walked off. And of course at Heinz Field, any Steeler is treated well and these were two very special ones.

Although the ice looked shiny and wet, the game began and play seemed to be normal as usual. Even though we sat in the end zone opposite the scoreboard, we could clearly make out the player’s numbers as they zipped along the ice. Terrible Towels waved in encouragement for the Pens!

Heinz Field is quite the open air stadium; no cover overhead. I dressed warmly, including a toque and sweatshirt with a hood. The rain never seemed that serious, we weren’t drenched or anything, it was more annoying than anything. Intermittent at first, then it rained fairly seriously in the third. By then the temperatures began to fall and the wind off the river picked up, making the conditions a little more uncomfortable.

On the ice, Evgeni Malkin scored a pretty goal for the Pens to open the scoring, followed by three unanswered goals by the Caps. Between the Caps lead and the damp weather, Pittsburgh fans seemed a little down, but the whole build up to the game and everything that went with it made it all worth it. Wouldn’t have missed it for the world – would go again in a heartbeat. Those three periods, even with intermissions, sped by.

• Some funny comments behind us in the stands from Pens fans. When

Mike Green was called for a penalty, they wondered if he would ride his little scooter over there!

• The blond Russian girl covering the game in the stadium obviously doesn’t appreciate classic rock. She introduced the band as “The Styx”. She also left out the important words “Sporting Goods” after “Dick’s” when she introduced “Dick’s Trivia”.

• For those of you who may not know, Pittsburgh has its own language called Pittsburghese. As a native, when I return, I fall right back into it very easily. So when the heel of my boot detached from the sole, I asked the girl standing beside me if she happened to have a gum band. She looked at me like I had three heads until my sister explained to me that the girl was a Caps fan, not a Pittsburgher. Undaunted, I said, “Do you happen to have a rubber band?” She said no, but then realized she had a hair band. She unwrapped it from her hair brush and gave it to me to wrap around my boot. “Now, how can I root against the Caps when you’ve been so nice?” I asked. She replied, “I’m not really much of a sports fan anyway.”

• As we drove to the ninth floor of the parking garage, we were greeted with the smell of burgers and kielbasa cooking as carload after carload grilled, drank and partied before walking to the stadium. As we came back after the game, many of the tables and all the fixin’s, including buns, mustard, ketchup, etc. sat on the same tables, undisturbed by anyone.

• One sweet little girl Pens fan held a stick containing a white-faced Bruce Boudreau on it – with a nice trickle of barbeque sauce running down his chin. Bruce says it was eczema – okay.

• The Terrible Towel was invented to bring good luck to the Steelers during playoff games. Since the 70s, it’s morphed into a Pittsburgh sports icon and shows up at all Steeler games. Since the Winter Classic was played at the Steeler’s home, fans were urged to bring their Terrible Towels to the game, which we did, in droves. But besides waving it when the scoreboard flashes, “Whip it!” there are so many other uses for it. For instance, I dried my wet stadium seat with it, then later put it on my lap to keep the rain off. It’s handy for twisting, turning, biting, chewing on during tense moments. If you didn’t grab enough napkins with your nachos, the Towel can even wipe off cheese sauce!
Posted by L.A. Ovens at 11:10 PM