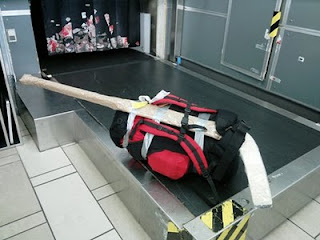 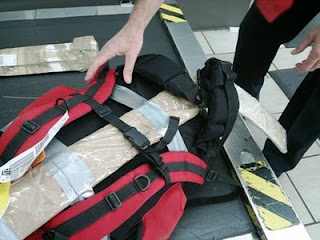 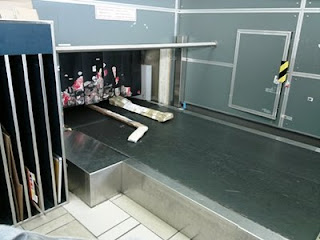 It's been some time since my last post. I have a pretty good excuse: my good friend, hockey buddy and creative collaborator, Michelle of Thunderpeep Designs made plans to move back to her homeland, Toronto, this month. And I helped her out through the moving process. We spent some great times together hauling boxes down the stairwell of her three floor walk up, and milling about transport offices like Fedex and Greyhound.

Hockey has moved on. Or rather, hockey has moved back to where she came from. You see, Michelle is a combination Toronto Maple Leafs fan/Calgary Flames fan. We rarely united on the NHL cheering front during her years in Vancouver. But we were as respectful of each others allegiances as we could possibly be. Of course, all of this changed whenever we hit Vancouver Giants games. We had some awesome times rooting for the Giants at the rink on Renfrew, and if we saw them on the road...it always seemed to be Everett, Washington as the road game destination of choice as they battled the Everett Silvertips.

Now, we have a plan...meet in Ottawa next year for the NHL's 2012 All Star Weekend festivities. But for now, it'll be me enjoying the rest of the Canuck's season while Michelle reintergrates herself into Leaf Nation again. And of course, plenty of skype! 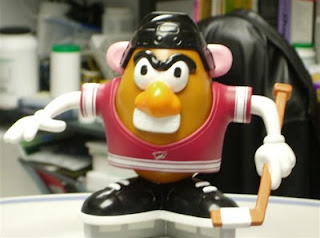 Yo, I wanna talk to the players right now, especially those ones that are running other players down. There's only one player out there on the ice that can take your hits, and that player is me. Why? Look at me...I'm a potato! You knock me flyin', I lose an eye or my duster, I just go into the compartment in my ass and get my replacement parts out. It's a no brainer for a potato like me. But if you headhunters out there keep doing what you are doing there'll be too many players with "no brainers", and that just isn't good for this game.


Take it from a potato...an NHL career is already too short for most, let's help make it last as long as it can for you and your brothers. Thanks for listenin'! 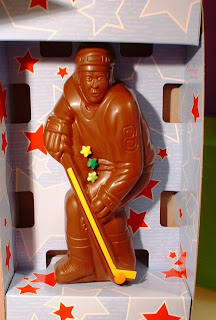 Before I get into the chocolate, I have to say its still winter in Vancouver…and it’s already March! I am looking forward to changing out of my winter photo there on the left. Come on, Spring…spring already!!

Anyway, the other day writer, Jan Snyder submitted her column titled March Madness (it’s just below this delicious column). I decided to use a “hockey advent calendar” photo to accompany the article. I then emailed Jan to let her know the column had been posted, along with a photo I shot. 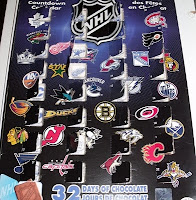 Well, she replied saying the photo was cute, “But what is that exactly?” Then I realized she might not know what an NHL Countdown to the Holidays Christmas Advent Calendar is because she lives in Houston, Texas, and these chocolate calendars probably don’t get that far down south. This is a little sad for any hockey fan living in a non traditional hockey market: they don’t get the treats! 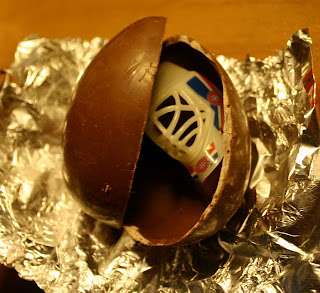 Not long ago I used this photo for a story…it’s the NHL version of a Kinder Surprise. I gave it to my friend, Michelle for Christmas and asked her to take a shot of what hockey surprise was nestled inside…A Montreal Canadien’s goalie mask…tiny and adorable…just like the team ;o)

Now, Easter is around the corner, the NHL has a much bigger egg on the market… 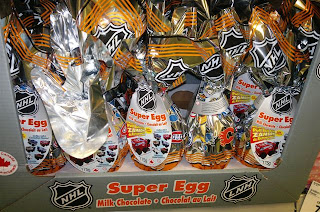 Unfortunately, most of the surprise has already been revealed on the packaging and display box. However, what's inside of the NHL Super Egg is way better than a Lady Gaga. There is a small Zamboni cradled in that egg, you just don’t know which team you’re going to get.

And finally, a photo of a hockey themed Easter treat I received last year from cousin, Jen and her man, Gervasio…

Check out the expression on the player’s face. 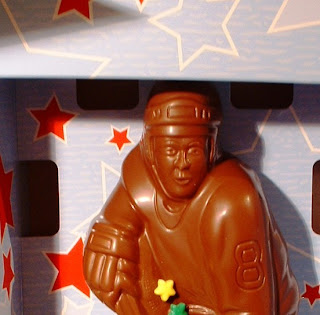 The chocolate mold artist captured one of the most popular random hockey player expressions ever! The slightly surprised, either waiting for a pass or just finished passing the puck sort of expression we see all of the time.

Don’t believe me? Here’s a shot of Vincent Lecavalier doing it… 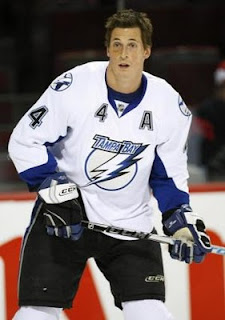 So…hockey fans in non traditional markets, I do feel for you, especially when it comes to the little things like hockey themed chocolate treats at Christmas and Easter.

Wish I could give you all a big ol’ hug. Dang!

Enjoy the stretch drive to the Playoffs and Easter...don't eat too much chocolate, eh!
Posted by L.A. Ovens at 12:58 PM 2 comments:


I enjoy SportsCenter on ESPN, but not in March. I dislike basketball and during March, SportsCenter doesn’t know any other sports exist – except when they discuss the upcoming work stoppage in the NFL. I grew up watching plenty of sports, but basketball was not one of them. In addition, as a child in my little parochial school, I was forced to play basketball, even though I was very short. My memories of playing the game revolve around all the inadvertent elbows to the head I took from taller girls (except for one that was shorter than me, that included everyone). Pittsburgh doesn’t have an NBA team to follow and I never got into college basketball, so I guess I just don’t have the b-ball gene.

But I do love hockey and the NHL’s version of March Madness is every bit as entertaining to me. I watched a bunch of games this past weekend and felt like playoff time had come early. The race in the East to make the cut for the playoffs is fierce, and in the West, it’s even worse. Each day the standings change with each game that’s played.

The Penguin/Bruin game on Saturday night was a case in point. The hitting was intense, the game was played cleanly, and every player on both teams was into it! After Boston tied the game very late in regulation, the game went into overtime. When Dustin Jeffrey scored shortly into the extra period, I jumped, threw my arms in the air, and screamed, “YES!” Even without the big guys, the little “Baby Pens” are helping to keep the Pens right in the thick of things in the East.

The only team that didn’t seem that into it this weekend was the Flyers, who played two games and lost two games. On Sunday, the Rangers destroyed them, 7-0. With all the other teams licking at their heels, the Flyers picked a bad time to have a letdown. But they’ll be back and both division races will go down to the wire – the only way they should go down!

The fruits of trades are starting to be seen. Arnott in Washington will be a big help, while Kovalev, Neal and Niskanen are already paying dividends in Pittsburgh. This is the kind of madness I love! Who will be the hero each game? Which team wants it more? Who gets more breaks? Pucks in nets beat basketballs in nets, in my humble opinion.