I thought I'd check out the Las Vegas Golden Knights website just to see what's what with the NHL's newest hockey team. I was pleasantly surprised to learn the Knights made special transportation arrangements for their fans...meet the Golden Knights Express bus.

For only four dollars, return, hockey fans from outlying areas of Las Vegas have a fun and safe ride to the Knights home games this season thanks to a partnership with Las Vegas Regional Transit (you can read all about it...link to story below)

I call that doin' it right. You see, just over ten years ago, I was at another NHL city in the desert, Phoenix, Arizona. I was in town for some fun and a hockey game. The day before that game, we visited the Yotes arena (it was called jobbing.com Arena in those days) for a tour. I had a rental car for the loooooong drive to Glendale, the arena's location. During the tour I asked the sales rep if they had special transportation for fans due to the location and the whole, "if you build it, the fans will come mentality" Nope..they didn't, and as far as I can tell, they still don't! I couldn't believe it back then, the arena was so beautiful and new, yet starving for ticket buying fans. The rep even told me how many of their fans lived in Scottsdale. SCOTTSDALE??? I yelled. Literally, I yelled and said, WHY DON"T YOU BUS THEM IN????

Just think, if the Coyotes managed to pull off what the Knights have done with organizing  transportation and making it as easy as possible for fans to actually attend games, they maybe could have avoided at least some of the hell they have endured over the years. GO KNIGHTS!!!
Las Vegas Review Journal  G.N Express story

Michelle Blackburn traveled to the induction event so she could both congratulate her fave player, and thank him in person for an inspirational letter he wrote to her as she was grappling with a breast cancer diagnosis back in 2010. Michelle has also done some serious fundraising for the fight against breast cancer. She's also from my mom's hometown, Thunder Bay, Ontario, so a big shout out to Michelle. Below is the link so you can read all about her story. GO MICHELLE!! WOOHOO PAUL KARIYA!!!        Michelle and Paul HHoF story

In Case You Haven't Seen This...

Nice work, Oiler Fans...you took the ball and ran with it!!

An incredible moment
When the mic doesn’t work, the crowd takes over & belts out The Star-Spangled Banner...
...In Edmonton
🇺🇸🇨🇦 #StanleyCup pic.twitter.com/pWvrlknbV6
— NHL (@NHL) April 30, 2017

Rogers Hometown Hockey Making a Stop in Nanaimo, BC!

Season three of Rogers Hometown Hockey broadcast will include a stop in Nanaimo, BC on Vancouver Island...my hometown! Okay...my other hometown, Vancouver, BC is also a stop on the Hometown Hockey tour during the 2016/17 NHL season. However, I must give special congratulations to Nanaimo, a small island town forever living in the shadow of  BC's capital city, Victoria, also located on Vancouver Island. Hooray, Nanaimo!

I moved to Nanaimo from the mainland when I was just four years old, living there all the way up to attending the local university before moving away to take on the rest of the world. Often, when I was in Vancouver, people would ask me where I was from and the conversation usually went like this...

Well, Victoria...its going to be all about Nanaimo this hockey season, and, of course, the other 23 Canadian communities selected to host the the traveling hockey show. Woot!

For American readers of this blog, allow me to explain what the show is all about:

Rogers Sportnet launched Hometown Hockey during the 2014/15 NHL hockey season as a means to connect with hockey crazy towns in Canada, from sea to shining sea. The Rogers mobile studio truck pulls into the hometown to broadcast a Sunday, prime time NHL game, as well as featuring the hometown's local hockey scene. The hometown plans the event to include a whole weekend's worth of activities leading up the NHL game broadcast. Basically, think Hockey Day in America, but, because this is Canada, Imagine every weekend is Hockey Day in America!

This must be in the cards for me because one of the NHL teams on the schedule for Nanaimo's stop is the Florida Panthers! Wow...I had a work visa in South Florida for several years - the Panthers became my hometown team there!  On Sunday, February 26th, 2017, 7:00 pm, Eastern time, The Panthers will be playing the Ottawa Senators, and, during the game's broadcast, my hometown of Nanaimo will become the backdrop for the entire evening. The even crazier part...Hockey and High Heels headquarters are currently located in Nanaimo right now!

I'm looking forward to covering this event as we lead up to the big weekend in late February, 2017.

Become a fan of Handmade by Heroes, Sports Fans !!!

Look what arrived in the mail...a beautiful, handcrafted, paracord Vancouver Canucks bracelet courtesy of my awesome hockey friend, Marie in Nashville!! Marie ordered it online from Handmadebyheroes.com. The heroes also produce a bevy of other bracelets, along with key chains and lanyards. The collections include NHL, NFL, MLB and NCAA teams to cover sports enthusiasts. They also have created some beautiful Medical ID bracelets and military bracelets, too. 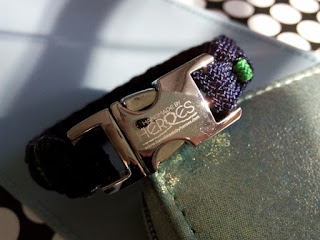 The clasp is fantastic... not only is it a stunning piece of hardware, but I can easily put it on without assistance - such an important feature for anyone who has difficulty managing bracelets. The website has a video for helping shoppers determine their sizing needs.

I think every NHL hockey fan should get one of these bracelets. Not only are they beautiful, the sale of each bracelet means a veteran earns money. As per their website, handmadebyheroes.com...

With every product you purchase, Handmade By Heroes employs a disabled veteran to make it. Our program not only teaches necessary job skills to help with transition in to the civilian work force, but provides therapeutic work and an environment which helps Veterans combat conditions such as PTSD, TBI and arthritis.


By buying our products, you are helping to empower our nations veterans.

Handmade by Heroes has partnered with Wounded Warriors Canada (WWC).  They are donating a portion of the proceeds of the Vancouver Canucks Paracord Bracelet (as well as the other Canadian NHL teams) to WWC which will directly support Canadian Armed Forces military members, veterans and their families.

There is really only one thing to do at this point, readers...visit handmadebyheroes.com now, purchase some of their great accessories for yourself and some gifts for your friends and family. You'll be buying excellent quality and workmanship, you'll help employ disabled veterans, you'll be showing the veterans and their families that you care, and your wrist will have never looked more fabulous during the upcoming season!

Now go visit the link below to learn everything you need to know so you can help spread the word, get your shopping on and give your credit card a little workout for a good cause!!

It was one year ago today that hockey writer, Jan Snyder passed away. Tonight, Jan's hometown team, the Pittsburgh Penguins begin their season on the road in Dallas, and I can imagine Jan's spirit will be right their with them, helping to kick off this year's quest for the Stanley Cup.

My friendship with Jan was a double blessing. I cherish all the fun we had sharing our passion for this great game. Plus, I was so fortunate when she jumped on board to become a contributing  writer for my website, Hockeyandhighheels.com. For over six years, Jan brilliantly covered all things Penguins, along with conducting some fascinating interviews with a variety of hockey celebrities. She was a consummate professional, teaching me so much about EVERYTHING.

Jan was my fabulous, long distance hockey friend. We spent countless hours talking on the phone: with me in Vancouver, Canada and Jan in Houston,Texas, our conversations drifting from hockey to life in general and back again. We actually only met in person, twice...

What an awesome coincidence that she had a conference in Vancouver exactly one day before the Canucks were to play Game Seven against the Dallas Stars during the 2007 Stanley Cup Playoffs, and I had tickets. That was a loud and crazy night in Rogers Arena, but I do remember Jan yelling, "I've never been to a Game Seven of Anything!!!" With so much hockey/sports in her life, I had a hard time believing that!

Our second meeting took place about six months later. I took the above photo of Jan while we were shopping for Pens merchandise in Pittsburgh when I was appearing at a Hockey and Heels event with the Pittsburgh Penguins. She flew in to support me at the event, graciously showed me around the city, and I was also lucky that she introduced me to her wonderful sister, Kim, daughter, Jen and son- in-law, Jim. What a terrific family!

Even though Jan was a displaced Pittsburgh-er living in Houston, she always managed to fly home to catch the big games with her family whenever she could, including the Winter Classic at Heinz Field. Of course, once little grandson, Ethan was born, she had an even better reason to fly home!

She didn't limit her hockey travels to Pittsburgh: Jan traveled to several NHL All Star games over the years and even braved the elements in 2003 at the historic Heritage Classic outdoor game in Edmonton, Alberta. She was my hockey hero.

I still can't believe she is gone. I get choked up from time to time thinking about her. If I ever I was going through a tough time, Jan was always just a warm, comforting phone call away. She always had the most encouraging words no matter what the situation. I am always going to miss you Jan.

The Pens and Stars game is about to start, so, I should sign off and put on my Penguins shirt. Jan's sister, Kim emailed suggesting all friends and family don the Black and Gold today to celebrate our dear, Jan.

She truly is one of hockey's greatest gifts.

BC Lions Football on Domestic Violence: It's a Men's Issue

Because the NFL fumbled on Ray Rice's suspension (a suspension that many deemed too light of a punishment  for a domestic violence incident), which, in turn, wound up costing ESPN's Steven A. Smith a suspension of his very own, I'm just gonna leave these here...please watch!

The BC Lions are taking care of business. I would hope the NFL and ESPN have some how seen the above PSA's, which are part of a bigger awareness campaign. For more on the BC Lions Football Club's efforts to break the silence on domestic violence against women...click the link below.


Be More Than a Bystander