If you saw TSN's broadcast of the Canucks vs. Ducks game you would have seen this guy....

and go Henrik...99 points and counting!

Here is the NHL Video breaking down the new rules regarding hits to the head including examples of hits both illegal and legal. It's at least five minutes long but if your are fan you have to watch it...this will be in effect as of tonight. 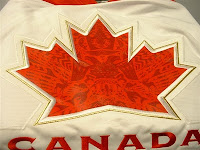 The jersey is from the Swiss game during the round robin. Remember, it ended in a shoot out...guess who scored the winner....that's right, Sidney Crosby!

One more day left for bidding, folks. Visit this link to ebay and watch the thrilling finish...game worn Team Canada Crosby jersey
Posted by L.A. Ovens at 11:51 AM No comments:

Mr. Potato Head PSA and Other Ideas to Reduce Dangerous Hits in the NHL

As a fan of this great sport, I care about hockey players, and like so many others, I'd like to see fewer stretchers and trainers on the ice aiding the victims of dangerous hits. So does Mr. Potato Head... 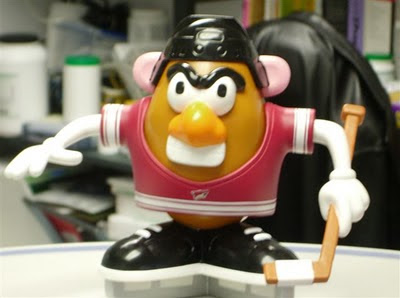 Yo, I wanna talk to the players right now, especially those ones that are running other players down. There's only one player out there on the ice that can take your hits, and that player is me. Why? Look at me...I'm a potato! You knock me flyin', I lose an eye or my duster, I just go into the compartment in my ass and get my replacement parts out. It's a no brainer for a potato like me. But if you headhunters out there keep doing what you are doing there'll be too many players with "no brainers", and that just isn't good for this game.
Take it from a potato...an NHL career is already too short for most, let's help make it last as long as it can for you and your brothers. Thanks for listenin'!
---------------------
I've been waiting for a few years to use the Mr. Potato Head the hockey player photo. Seriously speaking though it's bothersome to learn both sides of the league are so divided when they really need to be working closely together on a concern as important as safety. And let's not forget the other concern: popularity.
I really like this quote from Brian Campbell, Chicago Blackhawks defender and recent victim of a season ending hit....he's got the right idea... 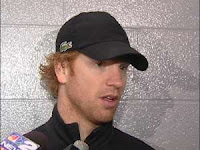 "We come off the Olympics, which was so great for hockey, and then within two weeks you have the hit on Savard and now this. What parent in the US watching is going to want to put there kid in hockey? We have to do something to stop this.”

As far as the players are concerned, perhaps in the off season they need to gather in an airport hotel ballroom, with some lousy coffee and little Club House sandwiches and have a conference. A two or three day affair to sort out their issues with respecting the game and each other and what the heck, why not discuss “the Code” while they are at it because everyone appears to be in a state of confusion when it comes to clean hits, dirty hits, when to retaliate, etc.

This has to be done, and as Don Cherry might say, do it "face to face."

The boys needs to get it all sorted out for next season. Either refresh everyone on the code, or re-vamp it or throw it out, but whatever they do get everyone on the same page, and keep it simple. Maybe someone could write a jingle. I remember the jingle for kilometers per hour vs. miles in relation to speed...this is something I would sing in my head when driving in the States,

I will never forget that jingle (trust me it was the cheesiest one ever). The players could use a jingle to help them stop and think about the consequences of their actions....

I wrote a sample jingle that they could use, or it could be a reference point for them to come up with their own easy reminder system. It's sung to the tune Is She really Going Out With Him? by Joe Jackson...

Could you imagine every player in the Mississauga Ballroom at the Hilton Toronto Airport Hotel singing that out loud? Okay, I am obviously being silly, but they gotta try out some stuff and they should show the fans at least that they really care about the future of this game.

Too many times, at the end of the season we hear about how the players just scatter around the world and begin their summers. Well I don't think that should happen this year. They need to come together, as a big group, hitters and victims, the fighters and the skill guys and have a big "players only" conference.

Dudes, June's a good time as any to strenthen your association by way of a conference. And the NHLPA needs to be stronger...Mr. Potato Head kind of strong ;o)

I've got more coming on this topic...It's like Dangerous Hits Week in Lisa's Hockey Lounge!
Posted by L.A. Ovens at 1:05 AM No comments: 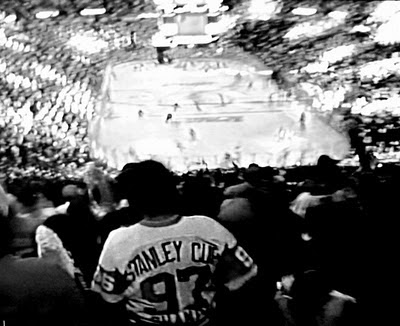 Okay...now back to icing my sprained hand...injuries suck! (So does typing with one hand.)
Posted by L.A. Ovens at 6:11 PM No comments:


As I watched the Academy Awards, waiting for them to get to the good stuff, an award was presented for Best Animated Short Film. The winner was entitled Logorama. From the clip the Academy provided, it was obvious that the French film had as its theme the fact that everything is branded in one way or another. From what I could see, the movie showed a city where the logos were larger than the establishments. 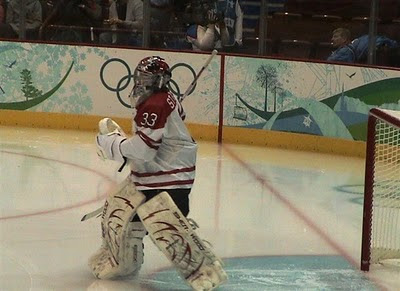 That little clip made me think back fondly to the Olympic hockey games (for more reasons that one) in Vancouver. Did you notice how nice the boards around the rink looked? No blaring ads for Viagra or car dealerships or beer companies. Just the nice look of blue and green that told us we were in a place with mountains and trees and the 2010 Olympic Games.

When I go back and watch really old games and see the pristine white boards now, it’s kind of a shock! We are all so used to seeing ads that I think sometimes we don’t really see them anymore. But, of course, subliminally, which is what the advertisers are shooting for anyway.

Over the weekend, I watched a couple of New York Ranger games televised from Madison Square Garden. Okay, this is New York – the City That Never Sleeps – but does that have to mean that every square inch of space is covered in neon signs? The Garden has found a way to add advertising at four places in the Arena. I have to assume that the signs aren’t impeding the fan’s view. They are high up on the glass and maybe are only seen by those watching on TV. But as each period of hockey begins, a new product is hawked on the Garden glass. One period it’s a sandwich shop, then a bank, and during the third period, a pizza place. Not only that, there are garish Budweiser signs atop entrances behind the glass.

Madison Square Garden needs more advertising? Really? The place has its own network! Does the NHL have any say in this? Since everyone is a copycat these days, I don’t expect it will be long before these ads are a given in every arena. Maybe there are more places where this is done, but I haven’t seen it yet.

Many arenas, including Mellon in Pittsburgh, have ads painted on every step in the walkways. There are even ads on the top of the interior dome of the igloo. So far, we’ve been spared the ugliness of some of the European leagues that adorn the player’s uniforms with ads. Please tell me they won’t eventually end up looking like NASCAR uniforms! In most rinks the four on-ice ads seem to be the limit. Maybe that is an NHL mandate to keep the ice from being totally covered with ads.

This isn’t just happening in hockey. When you watch baseball games, the rolling ads change behind the plate and along the tiers as the games go along. God forbid we should look at the same ad too long when there must be plenty of advertisers fighting for the right to clog up our TV screens.

While I’m ranting, can I also mention that every single thing in hockey now seems to be “sponsored”? The Powerball Power Play, the Sandwich of the Game, the Dental Practice Play that Made you Smile? I’ll give the admen points for creativity, but it’s gone so far overboard.

So I guess I don’t want to go back to the good old days of white boards, but I sure don’t like where all this logo-mongering or sponsoring every power play is taking us. If it keeps us enjoying the game we all love, I guess we’ll have to put up with it.

What do you think? When you are watching a game, do you find all the ads distracting? What are some of the “sponsored” activities at games you watch?
Posted by L.A. Ovens at 12:38 PM No comments: