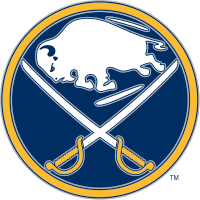 It’s Buffalo Sabres Friday in the Lounge. Yesterday, during my usual hockey surfing session, I spotted a poll on Canucks.com. Fans were asked "Which upcoming game are you most looking forward to?" I had a hunch the Sabres would run away with this one. And they did…


Buffalo Sabres
43.26 %
Dallas Stars
8.43 %
Winnipeg Jets
26.97 %
Montreal Canadiens
15.73 %
Phoenix Coyotes
5.62 %
The Canucks and the Sabres will be forever linked in the hockey:  they are expansion sisters, or if you prefer… expansion cousins. They both share a 40 year Stanley Cup drought, (although some opinionated folk will state it is only the Canucks suffering from some sort of a curse). Up until the  2011 Stanley Cup Final, the Sabres and the Canucks also shared the exact same number of times to the big show: two.
They even share some of the same hockey fans because we are all related, being born in 1970...many Canuck fans will cheer for the Sabres from a distance just because of that. 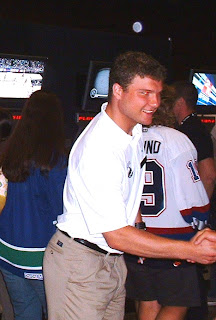 Now another link, or another reason to slot the Sabres into the “Fave Eastern Conference Team” category; and that link is Cody Hodgson. On Trade Deadline Day, I wasn’t able to check the days events until after 9pm EST, and yes, I did a double take on the Hodgson trade headline. I immediately went to CDC mesage boards, and wouldn’t you know, but the darn thing was down. I still don’t know why it was down, but it is my guess that it crashed due to a massive Knucklehead cyberspace gathering to discuss the big news.
Hodgson's first appearance as a Canuck was in the Summer of 2009 at a season ticket holder event. I was there, and happened to catch him on the floor meeting fans and posing for photos. I stood off to the side and watched him work the crowd, and I was very impressed. How often do we see a guy in his late teens in professional sports, oozing ambassador- like qualities? Yes, people, Hodgson was oozing. He appeared way beyond his years, like an old soul, chit chatting with a steady stream of adults and children. He was so busy with his diplomatic duties it was difficult to get a good shot of him, so the one above will have to do…
Best of luck in Buffalo, Cody Hodgson. May you continue your ascent to NHL stardom by being the best Sabre you can be.
Posted by L.A. Ovens at 10:14 PM No comments: