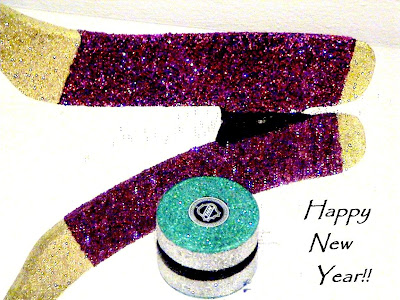 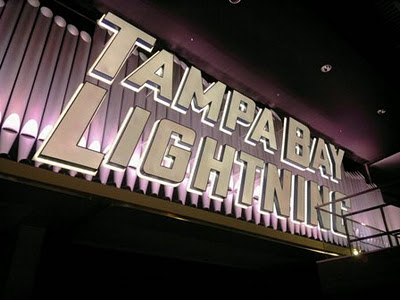 By Lisa Ovens
The room is pleasantly decorated with Christmas sparkle. Nigel Kirwan, the Lightning’s video coach greets us warmly. He then proceeds to breakdown last month's controversial  Lightning/Flyers game. He speaks candidly as we watch the video presentation he’s prepared. A question is asked about the current woes of the Bolts. Again, Kirwan is open and honest about the areas of concern.
Now, if this were Canuck fans seated in the media room with Canuck video coach, Darryl Williams, well, those Knuckleheads would be peeing their pants!! My point is, Canucks fans just don’t get this kind of team access in Vancouver. Did I mention the fans in the media room were all women?

Welcome to the Tampa Bay Lightning Hockey N Heels event, the Grand Daddy of hockey events for women. It was several years ago I figured out that the Lightning were the very first NHL team to host an event like this (the first one was 10 years ago), so you can imagine how happy I was to be there.
The time spent with Nigel Kirwan was just one of several presentations the Lightning had planned for their dedicated female fans. Before we were broken down into groups, we started the evening at the foot of the new digital theatre organ, one of several recent additions to St. Pete’s Times Forum.
Organist, Ray Horsely demonstrated the many wonders of the organ, and, at the end of his presentation, passionately encouraged all of us to get young people into taking up the instrument. I have to admit I was mesmerized by his words (and that big ass organ’s killer sounds) and did consider a slight change of course on my life’s path in order to fit in some organ training. I, too, would love to command that thing on a giant turntable, high above the crowd, as there is nothing like the tradition of organ music at the good old hockey game. Who am I fooling, I'd be a special sound effects junky with the digital organ if given the chance! 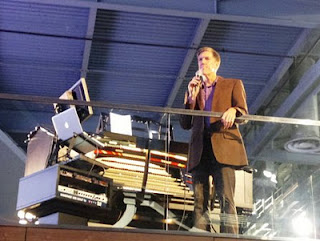 Organist, Ray Horsely
And on with the event…tours of the locker room, players lounge, training room, the cozy blade sharpening room. And with each stop we received tidbits of knowledge about the inner workings of the team: how the training room bustles with activity and is capable of mending so many types of injuries that occur during an average game. How often Steve Stamkos requires his skates to be sharpened, the unconventional hockey terminology of head coach, Guy Boucher. 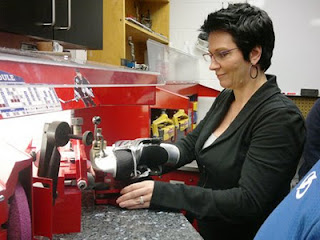 Super Fan, Linda is up to the task...
Mixed into the above was a chat with Dominic Moore’s wife, Katie. An athlete herself (soccer), Katie shared plenty about life with a guy who’s played on eight different teams. To sum it up…the crockpot is a key appliance in the Moore household. Katie left for her match, and former, long time ref, Don Koharski took the floor and offered some insight into the secret world of an NHL referee.
The last stop of the tour gave us some ice time with sticks, pucks and a few Lightning players (Teddy Purcell, Dominic Moore, and Matt Gilroy). Obviously this is a fan favourite activity. Who doesn’t want to be on the ice where your home team plays? I was re-united and delighted with walking around the ice with the puck on my stick. All I needed was my skates. Since the Lightning have been Hockey n Heelin’ for 10 years, it would be pretty cool to see them take it to another level by adding some skates, gloves and helmets into the mix at future events. 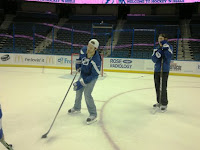 During the event I made a few new hockey friends like Linda, pictured above operating the sharpener, and a fellow blogger Alexis Boucher. Her Sons of Andreychek (great name, BTW) is a good read for all things Lightning and the link is right here..
Sons of Andreychek
Finally, the groups gathered once again on the new outdoor party terrace for refreshments...and to pick up tickets for part two of Hockey & Heels: Thursday's night game against the Calgary Flames. Ooh, the Flames, one of my Northwest Division rivals. Gee, I wonder who I will be cheering for Thursday night?
Many thanks to event organizer, Alison Goodman, and the Tampa Bay Lightning Group Sales Department, Hockey Operations and the rest arena staff for being such wonderful hosts. 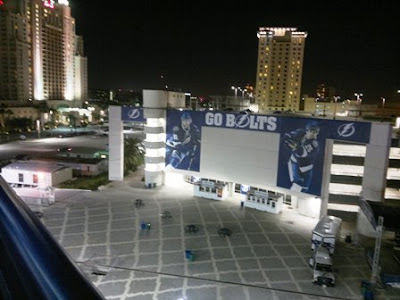 Girls Just Want to Have Fun: The Mother Pluckers Music and Hockey Society in Nova Scotia do just that

Four Goalies and a Planker 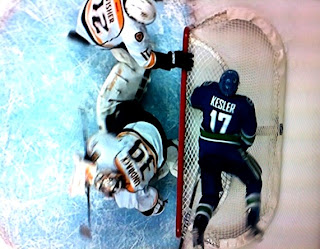 Well, almost planking. I had to miss most of tonight's Predators/Canucks tilt due to technical difficulties (at least I have the Panthers/Kings game on) but what little I saw I loved. Nothing like a crazy game between these two playoff rivals: Predators win 6-5, getting the go ahead goal in the dying minutes of the third, all four goalies saw ice time, and Canuck, Ryan Kesler has a moment on the top of the goal net!

Here's link to the video so you can see just how Kesler landed on the net, and the curious way he disembarked...